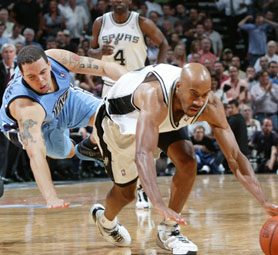 Before I delve into the eerily familiar Game 2 of the Western Conference Final series between the San Antonio Spurs and Utah Jazz, I must address what went down some 1800 miles away in lovely Secaucus, NJ just minutes before tip.  This year’s NBA Draft Lottery had an anticipatory feel somewhat akin to the infamous one of 2003 where the Cleveland Cavaliers hooked a royal catch.  Center Greg Oden and forward Kevin Durant were the no-brainer locks as the first two picks, but which team would end up with the big card in the big #1 or #2 envelope was still to be determined.  Fans from Boston to Memphis were licking their chops at the thought of either of these two prospects in their team’s colors.  For one Celtic fan, the promise of snatching the 7-foot center from Indianapolis was enough to push him into constructing an Oden #20 jersey.  Oops.

To be honest, I was solely curious about finding out where these two would end up, but suddenly it became apparent that I might be seeing a lot of these guys in the future.  Seattle the 2nd pick?  Portland with the first?!?!  These are the two dredges of the division that my home team occupies.  Oden in Portland?  Durant in the Emerald City?  Guess I’ll be hitting up those games early next year here in Denver.  Peep the Northwest Division.  First, you have Utah, who is trying hard to represent well in the Conference Finals (more on their issues below.)  Then, you have the Denver Nuggets, who should be primed to make a long run into the postseason with a full camp and year under their belts.  The Blazers can now boast not only a talented young line-up, but finally be proud of their player’s citizenship.  Seattle’s line-up is flat-out potent with Durant alongside Rashard Lewis in the frontcourt.  Remember, this team won the Northwest Division just two years ago.  This leaves us with Minnesota.  KG and the gang should find themselves with stiff necks having to spend all year looking up at their competitors.  I might have to expand more on this suddenly exciting division once the season is over.  Personally, my favorite part of the lottery was the s#%&t-eating grin that the NBA Rookie of the Year, Brandon Roy was sporting.

“I can’t believe we are going to get that Oden dude!?!?” seemed to be exuding from the Seattle-native.  Find a photo on a website or a newspaper with him not “ear to ear.”

There was a game last night, or so I hear.

In a series where they were given little hope of advancement (which includes yours truly) Game 2 started positively for the visiting Utah Jazz.  In what looked very similar to the games in the Golden State series, both teams were hitting shots early, but the Spurs were able to grab a 2-point first-quarter lead that they would never relinquish.  Again, it was the game’s second 12 minutes where the Spurs made their move, as the Big 3 led the home team to a 17-point halftime lead.  Sound familiar?  Despite another fourth quarter push by the Jazz, the game was never in doubt, as the Spurs cruised to a 105-96 victory to hold an almost insurmountable 2-0 series advantage.

The series can again speak to the importance of a TEAM.  We can dissect the team’s individual performances and look at why this San Antonio team is outclassing the Jazz at every level.

For starters, the Big 3 combined for 60 with Tim Duncan getting his 12th straight postseason 20 and10 night.  Tony Parker set his personal playoff best with 14 dimes, as the point played a wonderful all-around game taking just 12 shots on his way to 17 points.  It was the 3-ball, however, which again proved the difference, as the league’s 3rd best perimeter shooting team (a fact often ignored when breaking down the Spurs.)  For the night, the Spurs were 13-26 from long distance, getting three a piece from each Manu Ginobili, Brent Barry, Michael Finley (every team needs one), and Bruce Bowen, who personally hit a couple big bombs to temper each of Utah’s late runs.  Having the role players that the Spurs possess is a luxury that Jazz Coach Jerry Sloan is not afforded.  Other than his “Stockton/Malone remix” pair of Deron Williams and Carlos Boozer, Sloan’s cupboard has been pretty bare this series.  The remainder of the Utah starting five went a combined 10-33, not to mention the team’s paltry eight bench points.  For their parts, Boozer and Williams went for a combined 59 points with each hitting a double-double.

The series moves back to SLC from games 3 and 4.  While I think the Jazz can get one of the games at the Salt Palace, I feel even stronger about the Spurs moving on to the Finals.