A pre-Playoff reading recommendation for the King. 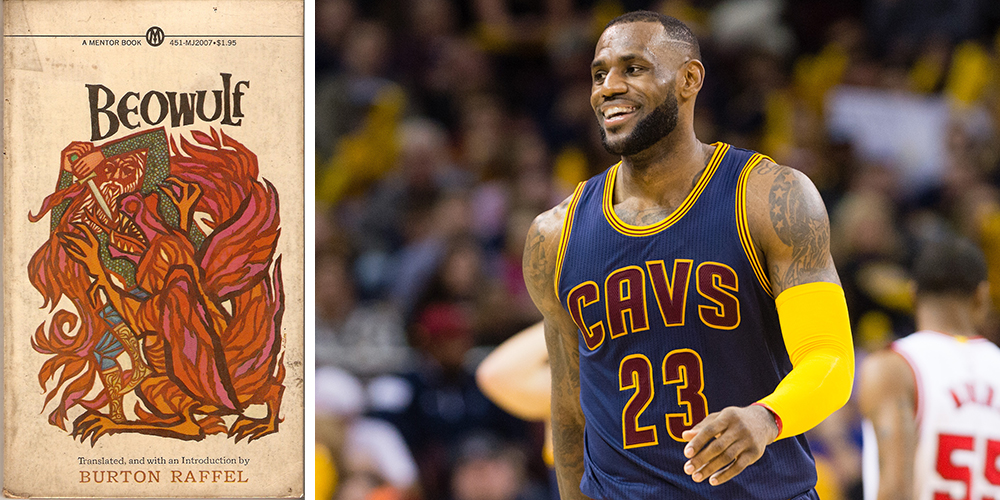 LeBron, you’ve been through a lot, and it’s been analyzed to death and beyond, much like your recommended reading. Beowulf is the story of a young warrior prince, more physically gifted than anyone else. He leaves home as a mercenary for glory. He finds that glory when he fights and defeats the monster Grendel and then Grendel’s mother. Those battles are like your two Championship rings in Miami, but a greater challenge awaits both Beowulf and yourself back at home.

Fifty years after killing the monsters, he has been a great King, a revered veteran warrior like you. As you have learned this year, going back home presents its own set of challenges. You needed to get your roster in shape and teach your men how to win, while everyone circled your kingdom looking for a sign of weakness that King James is no longer the King. For Beowulf, the other tribes are watching, waiting for the king to fall so they can attack his people. Home is also under assault from a ferocious dragon. Beowulf knows he will die in this last great battle, but he must fight to secure his legacy in the only challenge worthy of a living legend.

Your greatest challenge is winning that extremely elusive ring for your hometown, which has been cursed as sadistically as any realm in a fictional epic. This is a battle that will take everything you’ve got, all of the experience you gained playing for championships, while your physical dominance begins to abandon you at your age. Your teammates will have to help you as Beowulf’s men had to come to his aid when he faced the dragon alone. It may come down to a well-placed dagger after the dragon has bitten you, as the poison drains your life. Metaphorically! Like someone else making a play when you are tired. Are you able to inspire Kyrie, Kevin, Iman and the rest of your men to sacrifice for you as you could once exert constant energy for 48 minutes?

Yeah, it’s dramatic. You’ll love it. We all saw you reading The Hunger Games, which does have obvious parallels to a Playoff run. But that’s kids stuff. This is the origin, the Bill Russell to Anthony Davis. With the way the Eastern Conference has played out, you have some relaxing time before the Playoffs, enough time to read an epic saga before you craft your own.