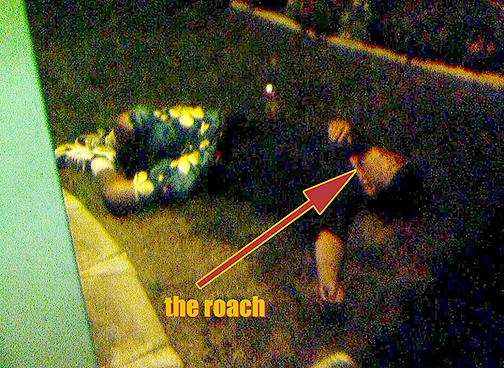 So I’m back in New York now, with my first Vegas experience in the books, or in The Links, at least — you can read Day One here, Day Two here and Day Three here.

Vegas seems to be a town built on a mix of idealism and absolute cutthroat capitalism. Every hotel, every show, every restaurant and casino bills itself as the best of its kind. There is no in-between, because everyone flat-out wants your money, sucker. There were two great signs outside one casino advertising a show featuring George Wallace (the comedian, not the racist former Alabama governor). The two identical placards were right next two each other, each about 12 feet high, the same words and photos across them. The lone difference was that one of the signs had the words “Funny Man!” above George Wallace, as if that one little kicker would be enough to push a undecided fan over the edge and convince them to buy tickets to see the show.

The whole proliferation of themed hotels is another example of this. For instance, when Julius Caesar was assembling the Roman empire, I’m pretty sure his innovations — paved roads, sewer systems — weren’t being made with the thought that somewhere down the line, there would be a hotel erected in the middle of the desert built around a Caesar theme, replete with a show in the mall courtyard every hour on the hour featuring mythological Gods coming to life amidst black lights and smoke. (And I’m pretty sure I saw a few Greek gods in the Caesar’s Palace show, which we don’t even have to go into.) The MGM Grand is allegedly about entertainment, the Bellagio and the Venetian are about Italy, New York New York is about New York, New York, and Paris is about Paris. Why in the world anyone would travel from Europe all the way to Las Vegas in order to see things that are just hundreds of miles away is beyond me.

While most of Vegas is lights and action, there’s also something a little sad about the whole endeavor. I can’t count how many elderly people in wheelchairs I saw propped up in front of slot machines. Most of them had half-finished 48 oz. margaritas in huge plastic novelty glasses next to them, and many of them had ashtrays jammed with cigarette butts shoved in next to their slot machine of choice. There’s some system in Vegas, I guess it’s for heavy gamblers, where you can get a credit-card device and put it in the slot machine. So instead of feeding it quarter after quarter, I guess it just withdraws money, perhaps straight out of your retirement fund.  The slot machines are numerous, and no matter what time you’re walking around the city there’s always someone playing the slots. But I never saw anyone win big at one. The first day I checked in, I went over and fed a twenty into a slot machine — within three minutes I was out.

The numbers of Vegas are just staggering, and I’m not even talking about the gambling stats. Before I left to come out, Wifey asked me if I knew anything about the hotel I was staying in, the MGM Grand. I didn’t, so I went online and discovered that it has — get this — over 5,000 rooms. And it’s just one of about 20 hotels on The Strip, all of them with similar capacity. A cab driver told me that the hotels in Vegas are at about 96 percent capacity year-round. I’m hopelessly addicted to drinking Starbucks every morning, so I was wondering how far I’d have to go to find a Starbucks; I figured there had to be a Starbucks within a few blocks of my hotel. Within minutes of entering the hotel, I discovered that there were two Starbucks in my hotel, each about 50 feet from the elevators.

Still, I enjoyed Vegas, and I’ll make it back soon enough, for All-Star if nothing else.

The most incredible thing I saw all weekend? On Wednesday night, as Arash and I walked out of the MGM Grand and headed up the Strip, we noticed a guy passed out in the grass just around the corner from the entrance to the hotel. A beer can rested innocently next to one hand and he was really out of it, his mouth wide open, so much so that he didn’t stir when I pulled out my cameraphone to snap his picture.

As I fiddled with the flash settings on my phone, Arash noticed something stirring on the guy. We looked closely and saw a cockroach, almost an inch long, slowly some crawling out of the neck of his t-shirt. Guy wasn’t moving at all, and the roach meticulously wandered its way up the man’s neck, up and over his chin and it paused on the man’s bottom lip, as if it was peering into his mouth to make sure all was clear in there.

I snapped a picture…

…and we turned and ran, screaming, before the roach made his mad descent.

I thought I’d perfectly planned my escape from Vegas. I was going to go to the US vs. Puerto Rico game, which was supposed to end around 10:00, and then go across the street to McCarran Airport and catch a redeye leaving at 1:00 a.m. back to New York. My flight was scheduled to get into New York City at 9:00 a.m., which would put me in the SLAM Dome right at 10:00.

The game ended, and I went and interviewed some guys and did the whole post-game media thing, and around 11:00 p.m., my man Arash and I hopped in Arash’s rental car and drove over to the airport, which took about 10 minutes. The timing was great so far — I’d be at the gate by midnight, thirty minutes before boarding.

As I rolled up to the check-in counter, I noticed something horrible: the flight was delayed two hours, which meant I’d have to kill 150 minutes in the airport in the middle of the night. But what choice did I have?

So I went on over to the gate and found a seat in the front of the floor-to-ceiling plate glass windows. I looked out and realized that just in front me was The Strip, in all of its glittering glory, winking at me, daring me to return.

And you know I will.