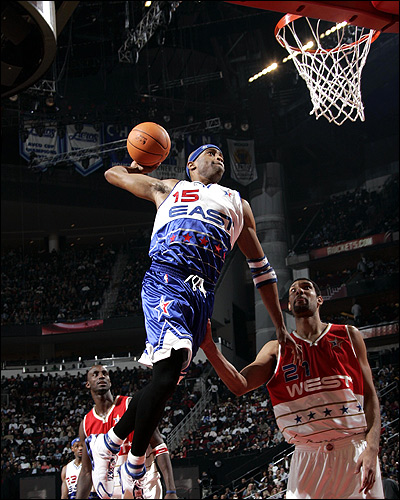 By now you’ve probably heard that the All-Star starters have been announced. Running them down:

Honestly, I’m pretty surprised Gilbert made it as a starter. I knew his popularity was growing, but I thought it was still underground in many ways. He’s surely the only All-Star to have been shirtless on the cover of SLAM months before with a huge tiger tattoo on his chest.

For the first time in a while, there’s no Vince Carter as a starter. Vince has always had such overwhelming popularity, which I never really understood, considering that he usually looks so sour when he’s on the floor.

Actually, I sort of understand his popularity, because the way he played his first few years in the NBA was so exciting. But as an NBA insider noted to me last week: “Vince has never really improved from his rookie year on.” And I knew exactly what he meant.

Vince came in so reliant on dunks and high-flying action, but once his body turned brittle and that threat in his game was removed, Vince didn’t have anything else to rely on. He can fire up jumpers with the best of them, but his shooting percentage is a thoroughly average 45 percent. When the clock fires down, all he can do is shoot fadeaway jumpers. At the Nets/Knicks game last week, twice I watched as the Nets ran last-second inbounds plays for Vince that consisted of throwing the ball to Vince, everyone getting out of the way, and then Vince settling for a long fadeaway jumper.

An All-Star player takes it to the basket, creates contact, makes something happen. Vince is no longer an All-Star.

(Luckily the Nets are only paying him $15 million to shoot jumpers. Vince has a player option for $16 million next season, meaning he could opt out this summer and go elsewhere. But if he thinks he’s getting more than $16 anywhere else, to borrow a line from Sussman’s blog, he must be nets.)

Also, for you SLAM readers with short memories, this means SLAM has had 8 of the 10 starting All-Stars on our cover in the last year, and 9 of 10 if you count the D-Wade/Shaq cover before last season started. The only one left is Yao, and if he wasn’t on the chilling list right now we’d be all over him.