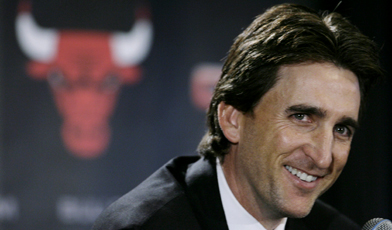 Chicago Bulls players thought they had finally got rid of relentless, taskmaster-like coaches when Scott Skiles was dismissed. Those guys probably figured rookie bench boss Vinny Del Negro would take it easy on them as he tried to learn the coaching ropes in the League. Boy, were they wrong.

Unhappy with the team’s performance against Minny on Tuesday night, Del Negro made his squad pay for their listless performance by having them spend much of the following day on the practice floor.

After about an hour in the film room watching video of Tuesday’s game, the Bulls were on the court for an additional three hours Wednesday, pushing the official practice session over the four-hour mark.

That’s a mighty long time to be going through basketball drills; even Pat Riley thinks it’s a tad much.

One person who wasn’t around for the grueling session is Ben Gordon, who’s nursing an injured big toe … or possibly staging some kind of protest for not getting that long-term deal he so desperately wants: “People are going to read into what they think, but no one really knows the truth other than Ben and us,” Del Negro said.