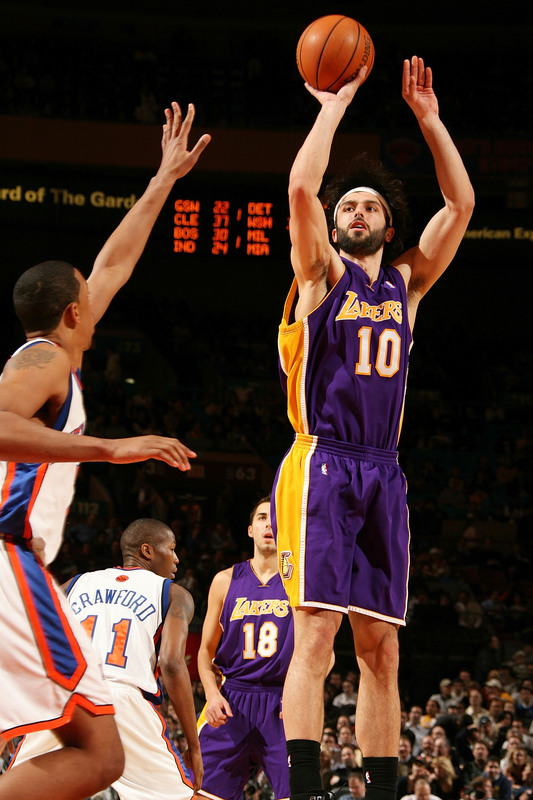 As soon as Vladimir Radmonovic signed with the Lakers, I couldn’t help but notice that he bared an uncanny resemblance to Al Pacino’s character in the classic 1973 film Serpico. Whenever Vlad lets the beard grow, it’s almost impossible to tell the two apart.

Based on a true story, Frank Serpico was a young, honest cop, who put his life in danger by blowing the whistle on rampant corruption within the NYPD. He was a man of conscience. And now, it seems that he and Vlad might share more than just looks.

Earlier in the week, Radmonovic had informed the team that he injured his shoulder (he’s out of action for the next eight weeks) after slipping on a patch of ice while grabbing some coffee with a friend. The team accepted his explanation, but not without some skepticism.

“We have to accept that story and go from there. We have to believe that our boys are being honest with us in this situation, right? It is a situation that’s a curiosity for sure.” Phil Jackson said.

Well, it seems that Radmonovic’s conscience got the best of him. And today he came clean. Vlad Rad admitted that he fell during a snowboarding trip in Park City, Utah, during the All-Star break.

“First of all, I’d like to apologize to my teammates, coaches, Lakers management and Lakers fans for initially lying about the circumstances of the injury to my shoulder last weekend,” Radmanovic said in the statement. “I’d like to, however, come forward and set the record straight at this time. The truth is that I hurt myself in a fall while snowboarding. Being young and sometimes immature, I initially panicked and made up a false story about how I hurt myself. However, over the past few days my conscience has been bothering me terribly. I am not a dishonest person and could no longer live with this deception.

“Therefore, I came forward today and told the truth to the Lakers. It is just as important to me though, to be honest with Lakers fans and the public in general, therefore I am making this statement and apology. I can’t express enough how deeply sorry I am, not only for the activity that led to my injury, but also for the initial deception of my story. I hope for everyone’s understanding and forgiveness. I vow to work as hard as possible to rehabilitate my shoulder and rejoin my teammates as soon as possible and to help us become a team that Lakers fans can be proud of.”

Awww. Isn’t that just adorable? Serpico would be proud, son!

The Lakers will probably slap him with a fine, but the possibility of voiding his contract (highly unlikely) will also be considered.