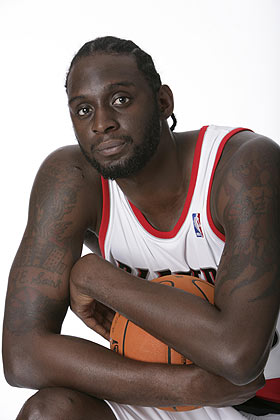 I’ve got, like, six billion things to write. Was in Portland and Atlanta over the past two weeks, saw such thrilling matchups as Lakers/Blazers (if only it was 2001) and Hawks/Bucks (if only it was 1987). But when I opened an innocuous-looking NBA News e-mail today, I was inspired to put something up. Immediately.

Yes, that’s right. The NBA All-Star ballot is officially out. And thank God. I mean, it’s the middle of November already! It should be entirely obvious who should be representing the NBA in Las Vegas in, um, three months. Just look at the ballot, so many deserving names!

Like Kenyon Martin, who’s out for the year! Or Boris Diaw, who apparently ate his way through France this offseason! Or Pau Gasol, who’s been perfect this season, having not played in a single game! Or let’s not forget Stephon Marbury, who has already had two games with o-fer’s from the floor and gets booed every time he takes the floor. At home. Or Chris Mihm, who’s also out for the year. What, no ballot love for Darius Miles? Guess I’ll have to write him in.

I will NEVER understand why the NBA can’t wait until after Thanksgiving (at least!) to put out the All-Star ballots, especially when so many votes are cast over the Internet. And, um, from China. Would it really matter if there were fewer total votes? Would that be so bad, if it meant taking some guys off the ballot (either guys who have been injured, or are just playing like crap)? It’s obvious, from the inclusion of guys like Mihm and Speedy Claxton (who also hasn’t played yet) that the ballot is made up before the season even starts. Which is ridiculous. Right?