The Knicks legend talks about the current state of the team, NBA style and plenty more. 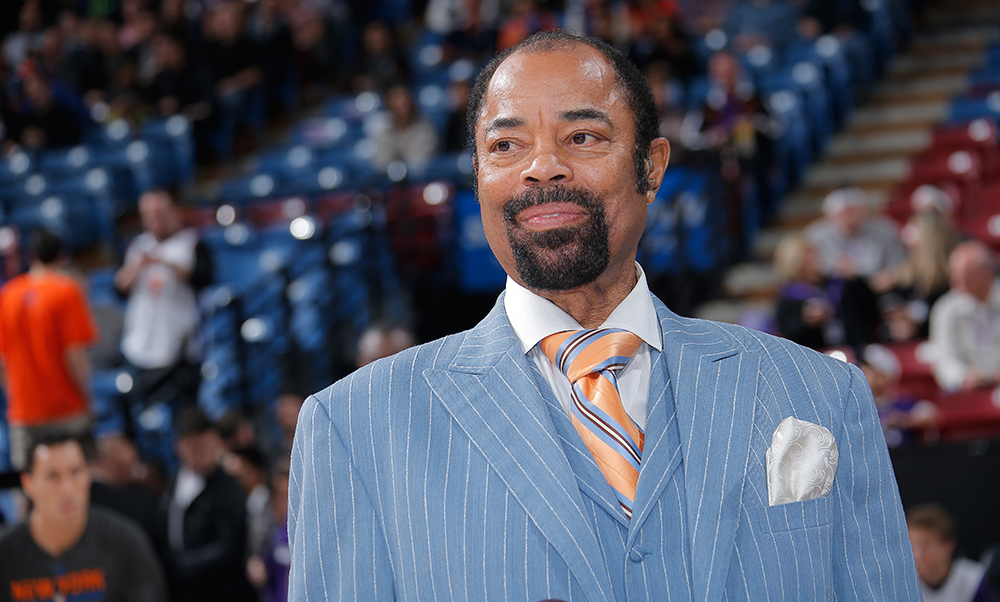 No matter how deeply any of today’s NBA players embed themselves into the world of fashion, they’ll forever be living in the shadows of Knicks great and MSG broadcaster Walt “Clyde” Frazier, who decades ago perfected the art of looking a trillion times more fly than the average citizen could ever dream to be. Yesterday, at Clyde’s own restaurant in midtown Manhattan, he was posted up with five-time MLB All-Star Keith Hernandez, debuting the duo’s new Just For Men commercials that’ll air nationwide in the coming months. (The two, along with the grooming company, will also be promoting a social media contest called Beardspotting, in which they search for the “Best Beard Ever.”)

After the announcement, we caught up with the two-time champion to talk about the future of the Knicks, modern NBA style and plenty more.

SLAM: What are your early thoughts about the Knicks drafting Kristaps Porzingis and what you’ve seen from him thus far?

Walt Frazier: Well, obviously we were disappointed. Everyone was kind of looking for some kind of a savior now. Porzingis is talented, but he’s a few years away, and right now I wouldn’t say the Knicks are a playoff team. A lot of things have to go right for them to make the Playoffs this year. They’re still in the rebuilding process.

SLAM: The Knicks have guys like Kristaps who seem to be a couple years away from making a difference, yet they still have Carmelo Anthony, in his prime, on a max deal. Could that cause some friction within the team?

WF: It could be problematic, especially with Melo—his future is now, not two years from now. So it’s going to be interesting to see how he approaches the season and how the Knicks approach him with where he’s going to fit in with their future.

SLAM: What are some other things that you’re looking forward to seeing from the team?

WF: Defense, man. My two rings are predicated on defense. That’s the quick fix. We’re not acquiring anybody—just some more tenacious defense, and that’s what they’ve got to bring. The pressure’s on [Derek] Fisher. Last year I gave him a pass—he was a neophyte. But you know this year obviously the honeymoon is over so he’s gotta earn his medal as well, with the way he’s coaching.

SLAM: Do you ever speak with Phil Jackson about the team?

WF: No, I haven’t really talked to him about it. I went to the training camp last year and since then I’ve never had any basketball conversations with him.

SLAM: NBA players focus on their personal style now more than ever before. Do you feel like the forefather of that movement?

WF: Yeah, a lot of the guys that acknowledge that I brought the bling to the NBA, the Rolls-Royce, the mink coats—all the things that they’re trying to do now. I kind of laugh when I see it happen before the games, after the games, when the guys are trying to outdress the other guys.

SLAM: What do you consider to be the low point of NBA fashion?

WF: The low point was imitating the rappers, walking around with the pants—the baggy pants hanging off. You know, you’re professionals. I was happy when the NBA implemented a dress code. It’s only for only two or three hours when all these guys are meeting there, so they should look like it. I thought the NBA did the right thing.

WF: Yeah, it’s putting a lot of pressure on me because I can’t wear the same thing over and over, so I have to check him to see the last time I wore this outfit. It’s humorous, though. I get a kick out of it.

SLAM: It gives every outfit of yours a grade, too. Do you ever look at your grade after the fact and think, Damn, should’ve dressed a little better so I could’ve gotten a higher grade?

WF: It’s just the redundancy. I try to mix ’em up a little more, ‘cause sometimes I don’t think about when I wore this suit or what I wore it with—but this guy does. He’s critiquing everything that I do. [Laughs]

SLAM: He probably thinks about it more than you do.

WF: Yeah I know, and then he goes back two or three years ago with the suits. I actually met him at a game.

WF: I told him that, you know, I’m flabbergasted by what he does. It’s outstanding—keep up the good work.