Warriors Come Out and PLAAAYYY!! 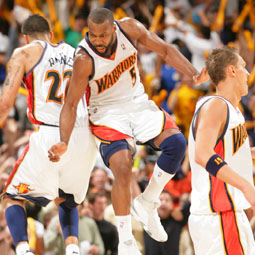 Remind me the next time someone tries to explain how great Dirk Nowitzki is that its at least probable that he has to sit down to take a wiz. I mean are you kidding me? Did I hear that right? Those 2 late threes Dirk hit in the 4th were his first two 3 point makes of the series? How is that even possible?

I got people from the Bay and an old ex who lives out there so my allegiance is with the Warriors. I saw that they had a fire out there on the freeway last night but if they win this series they’ll start another fire just for celebration purposes. Maybe I should stop saying if and say when. I’ve watched a lot of basketball over the years (damn I sound old) and I’ve seen teams come back. Phoenix came back from a 3-1 deficit last year on the Lakers so it can happen yes. But you don’t even see the tenacity on the Mavs team to think a comeback is possible. They can win game 5 of course but what happens when they get back to the Yay? When you got dudes like Matt Barnes taking a crap on your program things couldn’t be worse.

The recently named 6th man of the year Monta Ellis went scoreless and Al Harrington did nothing last night and they still won. So they can play better and take it up to whatever notch Dallas will take it to on Tuesday. I’ve always liked Baron Davis but your man stays hurt on the sidelines. It’s been easy to overlook him the last few seasons because he hadn’t played. But now after some weight loss that take the wear off his body he’s playing out of his mind. He is a problem right now and Dallas can’t seem to do anything about it. I like Devin Harris and think he’s an underrated player but right now he don’t want with BD, he’s getting killed out there. Maybe they should put Josh Howard on him, even if he’s at a mismatch quickness wise you get some resistance back with the height and weight that J5 brings to the table.

But what do I know, I’m not gonna second guess Avery Johnson. Wait, yes I am! Last night was his third starting line-up in the series. Who is he, Larry Brown? I think Avery is a top-tier coach in this league but he’s getting shi–ed pon (not a typo) by Nellie who has put down the whiskey bottle long enough to remember that he once was considered a forward-thinking coach in this League.

But again most of the blame falls on Dirk. You wanna be the man, right? Then don’t talk about it, be about it. I though GS would give Dallas a fair one, six games max. Instead they’re about to take the series. And they deserve it. I don’t care if I was wrong with my prediction, at this point, with the way they’re playing (except for Jason Terry I guess who is still doin’ him) I want the Mavs to lose. Remember when people were comparing them to the ’96 Bulls? LMAO!!!!! The only thing that would make it better is if the Mavs lose and then Dirk wins the MVP. Then they would announce it and do it how they do it when someone wins a Grammy and they aren’t in the building. So you would see Dasagna Diop accepting the award on his behalf with Dirk via satellite from some grainy broadcast from Germany saying how much he’s honored to win. How classic would that be? How many youtube hits would that get? Of course we all know that David Stern would switch the votes at the last minute to ensure that won’t happen but its fun to speculate.