The Wizards, Bulls and Bucks hang on for wins on Monday night. 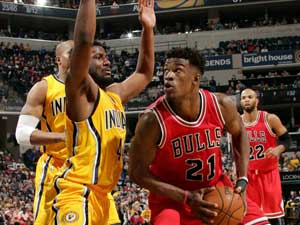 A game that Milwaukee looked like it had in the bag ended up going to overtime last night in Charlotte. The Bucks scored 49 points in the first half on 46.3 percent shooting, and they held the hometown Hornets to 32 points on 26.2 percent. After the break, the tables turned. Charlotte dropped 29 points on the Hornets in the third and kept the Bucks at 19. In the fourth they managed to outscore the Bucks again 22-15. They climbed all the way back from a 21-point deficit to take the game to overtime, but that’s when the Hornets collapsed. Milwaukee turned their game back on to score 21 on the Hornets’ 11 and walk away with the win. Milwaukee shared their offensive responsibilities, as six players finished in double-figures. John Henson (11 points and 5 blocks) is one of those six, and check out what he did last night:

This was another game that looked like it’d been put away before the final seconds, but it wasn’t totally over as early as we thought. The visiting Bulls had a 21-point second half lead over the Pacers after holding the hometown team to only 35 points in the first half. But in the fourth quarter, Indiana went on a 20-0 run as Chicago missed 17 consecutive shots. That run was led by none other than Chris Copeland, who sank 13 of his 17 points in the final period—more than the entire Bulls’ team combined (they only scored 11 in the fourth). The Pacers even took the lead in the last quarter, but a 3-ball from Jimmy Butler (27 points and 9 rebounds) gave the Bulls a lead that would remain for the final minute of the match to extend their League-best seven-game winning streak.

Mason Plumlee sure is getting comfortable in his starting center role for the Brooklyn Nets. In last night’s game versus the Sacramento Kings, Plumlee scored a team-high 22 points (plus 3 steals and 4 rebounds) to lead the Nets to their fourth win in five games. He had plenty of help too, as five other Nets also scored in double-figures. DeMarcus Cousins had a nice game for the Kings, with a 25-point and 13-rebound double-double performance. Cousins also had 5 turnovers, contributing to his team’s total 21. The Nets translated that into 25 welcomed points of their own.

A lot of stats between the Heat and Magic in last night’s game are starkingly similar. Total rebounds (Miami 36, Orlando 34), turnovers (14 each), fast breaks (11, 10), points in the paint (32, 38). A lead never extended past 10 points, and no quarter ended with a point differential greater than four. Both teams shot nearly the same percentage from the field (52.4, 53.2). Even the star guards had similar stat lines—Victor Oladipo finished with 22 points and 4 assists and Dwyane Wade dropped 25 (15 in the fourth) and 6. The game could’ve gone either way. The Heat were happy to have Chris Bosh back, who contributed 20 points and 8 boards after missing eight games with a strained calf. The Magic were quite pleased with their own center, Nikola Vucevic and his game-high 26-point, 9-rebound night. Down a single point with with 6.3 seconds remaining, Wade shot a 3, but it bounced off the rim. The Magic left Miami with a W.

Another double-digit lead in the second half was picked away at in the final quarter of the game. The Washington Wizards had an 18-point advantage on the Houston Rockets in the third quarter. But James Harden (33 points and 6 rebounds) and his Rockets dropped 36 in the final period to tie the score and make sure the game went down to the wire. Even by outscoring the visiting Wiz by 10 in the fourth quarter, the home team was never able to take the lead—Bradley Beal wouldn’t quit knocking down his free throws! Beal finished with a season-high 33 points and 5 rebounds.

John Wall added a 13-point, 12-rebound double-double, and Paul Pierce contributed 21 points to give the Wizards their third consecutive win.

Blake Griffin did a whole lot in last night’s Los Angeles Clippers’ win over the Utah Jazz. He had 6 rebounds, 7 assists, 2 steals, and 3 blocks to go along with a game-high 24 points…which included this filthy slam:

The game in the Staples Center was a close one, with 15 ties and 10 lead changes. Despite getting owned 18-7 in offensive rebounds and 44-18 in points in the paint by the Jazz, the Clips managed to get a win at home.