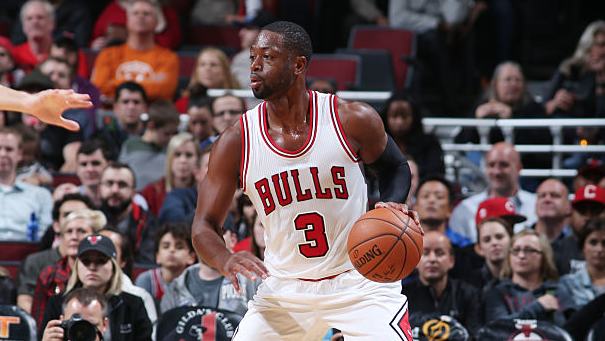 Bulls fans got their first look at newcomers Dwyane Wade and Rajon Rondo in Chicago’s 93-91 preseason loss Monday night to the Milwaukee Bucks.

Wade says there’s reason for excitement in the Windy City, since no one quite knows what to make of this squad.

Rondo finished with 7 assists, 6 rebounds and 5 turnovers in 24 minutes.

Like most everything else with these new-look Bulls, Wade without “Heat” on his jersey will take some getting used to. […] “I put that book away. Next time I open that book will be Nov. 10,” Wade said, alluding to the Bulls’ first trip to Miami. “Right now, my job is to focus on being my best Dwyane Wade here in Chicago at the tender age of 34, bringing something to this team, organization and city. And it’s no pressure on me because my expectation of myself will always be higher than outside expectations.”

Even Wade admitted expectations for this team — with so many new faces — are anybody’s guess. […] “The unknown is exciting,” he said. “A lot of people are waiting to see good or bad what this team is going to do.”

Wade and (Jimmy) Butler, who was introduced last of the starters, didn’t play in the second half. […] “I’ve been in the league 14 years,” Wade said. “This is a straight marathon for me. I’ve talked to Coach about playing a few minutes and kind of revving up as we go on. … Everything for me is different surroundings. But it’s still basketball. Nothing has changed from that standpoint.”