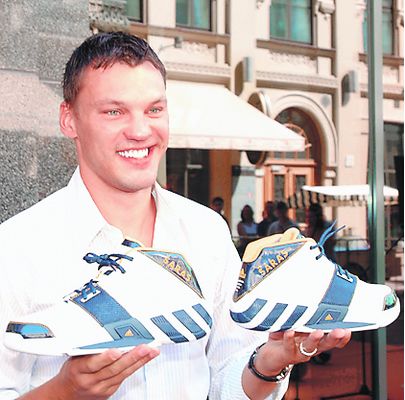 QUOTE OF THE DAY
“I’ve never been there. You know they don’t let Black people in the governor’s mansion in Alabama — unless they’re cleaning.” — Charles Barkley.

THE LINKS
• The Cavs have addressed the team’s needs by signing…a 35-year-old, six-foot-tall shooting guard? That’s right, it’s time for the David Wesley era to begin in Cleveland. The Plain Dealer story is pretty negative, from the lede to the mention at the end about Wesley’s involvement in the auto accident that killed Bobby Phills. Cavs beat writer Brian Windhorst says he heard from people in Houston that David Wesley looked done by the end of the season, though he doesn’t neccessarily agree. (Windhorst also says he was bitten by Lucious Harris, but I think/hope he’s being figurative there.)

• The Nuggets and Wedgie Evans have apparently agreed to a five-year contract. Despite his Nutcracker routine in the Playoffs, I’ve always though Evans was way underrated.

• Meanwhile, the Rockets have signed Casey Jacobsen and Matt Haryasz, who both played in Europe last season and, more importantly, both played at Stanford. I wonder if this has anything to do with Houston’s GM-in-waiting, Daryl Morey, who was a statistical analyst for the Celtics and has been credited with developing a “Moneyball” approach to basketball. In “Moneyball,” the Oakland A’s place a lot of importance on guys who test well and may be smarter than the average baseball player. Will the Rockets now only sign guys from top academic schools? They got Battier, right?

• Charles Barkley sounds serious about this running for governor thing, although he notes he can’t run until 2014.

• Long feature on Sarunas Jasikevicius, with details on his summer wedding. Apparently he wore a white suit and entered the ceremony to the melodramatic strains of “(I Had) The Time Of My Life,” from Dirty Dancing. And we owe it all to you, Sarunas. Nobody puts Sarunas in a corner! Nobody! They’ve also got a shot of his new adidas signature shoes, which appear to be Gilbert Arenas’s new Gil-Zeros but with Sarunas’s nickname embroidered on the back. I’m pretty sure this is just a way for adidas to motivate Gilbert. (Sarunas looks kind of like Matt Damon there, doesn’t he?)

• David Aldridge breaks down the top suitors interested in buying the Sixers.

• Pau Gasol has broken the bone in his foot that connects to the pinkie toe, and he’s going to be out three months. The Grizz say tough break.

• The Kings tell Bonzi Wells thanks but no thanks.

• Canzano links to this video of a Portland TV reporter showing off her skateboarding skills. Awesome.

• It’s been four years since Wyc Grousebeck and his people bought the Celtics, and they insist they’re going to continue to improve. They never address how having Danny Ainge making basketball decisions relates to that goal, though.