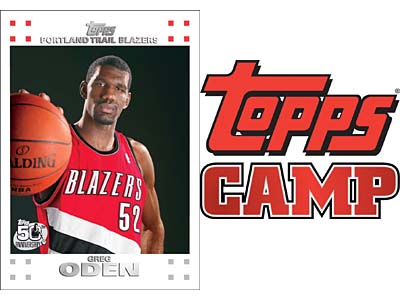 For some, trading cards are a bit outdated. However, the people at Topps Inc keep finding ways to keep cards fresh. From their in-pack autographed cards to their relic cards that feature dirt from A-Rods batters box or material from D-Wade’s uniform. Now, looking to bring a more interactive feel to their brand, Topps Inc. is establishing their own Topps Camps program to bridge the gap between the athlete and the fan.

“We’ve been trying to get kids back into trading cards and what better way to do that than have camps with some of the top athletes we’re associated with,” says Eric Liebler Manager of Player Licensing of Topps Inc, one of the premier producers of trading cards in the world. “The video games and the Internet are big now but we want to start these camps to expose kids to our brand and trading cards in general.”

Last year, Topps ran three camps that featured their spokesman basketball players Dwyane Wade, Chris Paul and Udonis Haslem. They also conducted a one-day baseball clinic of Ryan Howard of the Philadelphia Phillies. The camps are designed so that Topps athletes, many of whom are All-Stars in their sport, spend as much time as possible working out with the campers. It’s this effort that will separate the Topps Camp experience from those of other celebrity athletes.

“There is something to be said about meeting your hero, or a superstar athlete, in person,” says Liebler. “Our camps are set up so that our guys spend the entire day with the kids, not just some ten-minute breeze through. The athletes speak to them, answer their questions and also to spend time and teach them.”

This September 13 & 14th, Topps will team with the NBA’s 2007 top Draft Pick, Greg Oden to the first in his series of Topps camps. Although an injury put his rookie season on hold, Oden and Topps are excited to bring him out into the Portland community and introduce him to the Portland Trail Blazer fans he’ll be playing for.

By 2009, Topps plans to add camps from this year’s draft class including OJ Mayo, Kevin Love, Mike Beasley and Eric Gordon. Besides their efforts with hoops, tops plans to extend their camps to their athletes from pro football and baseball.

“This is kind of the first step going towards making Topps more of a multi-media sports property,” says Andrew Pitagorsky, a former SLAM advertising chief and current Player Licensing Events Manager for Topps Inc. “Each player will be at the camp the entire time and the majority of the kids will get an autographed picture, camp t-shirt and cards. This is, for Topps as a company, a way to get kids interested in trading cards again. We’re trying to take the trading card and bring it to life for the kids.”