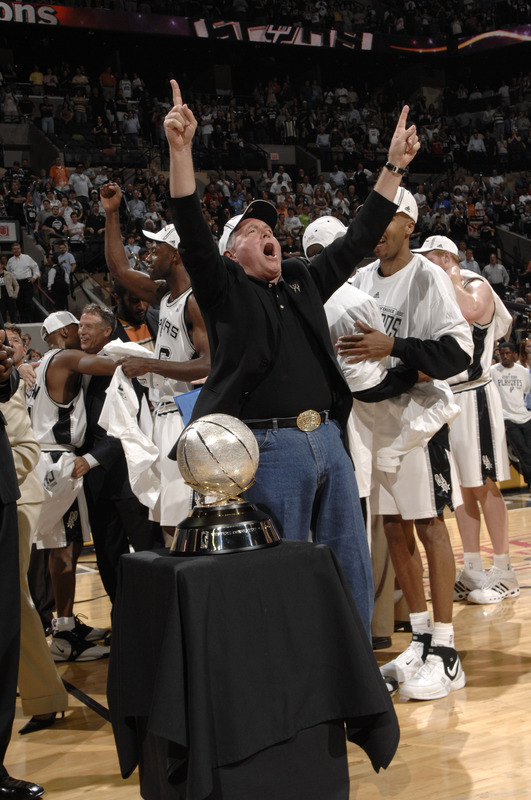 Sorry, it feels like I’m contractually obligated to say that. There was a Western Conference champion crowned last night. The Spurs entered the playoffs as the third most likely to get to the Finals from out of the loaded West. After much luck, dominant basketball, great defense, timely offense, their toughest competition collapsing in round 1, flopping, respect, annoyance, wringing of the hands, accusations of conspiracy, accusations of dirty play, whining from writers, dodging projectiles in Utah, and most importantly taking care of business, they are back in The Finals.

Congratulations to the San Antonio Spurs. Whoever comes out of the East will have a tough task ahead of them. It looks like I will be attending my first ever NBA Finals this year, and it will be the middle games hosted by the Eastern Conference rep. So, it is a trip to Cleveland or Auburn Hills. Based on that 30 Rock episode with Tina Fey and her boyfriend, I am hoping for Cleveland.

My last experience in Ohio was when I took a six week course in music production several years ago. While there, I witnessed such marvels as cross burning, animal sacrifice, and the morbidly obese walking around the corner store in bare feet. Not to mention feeling the sweet burn of tear gas during a riot that happened on 4/20 of all days. Let’s go Cavs!

Cub has the game report from last night’s clincher forthcoming. The second half probably won’t be that interesting. I got home after halftime last night, and it was o-ver.

What is most amazing to me is that somehow the big winner is David Stern, once again. He has his coveted big name star gossip in the spotlight. People are talking about KOBE (OMG!) which is great for his league from a discussion interest standpoint. On the other hand, he enforced the rules to the letter of the law regarding Amare and Diaw, so he can also cling to the perception that the NBA is a level playing field. I don’t know how he did it, but Stern came out a winner on both the entertainment gossip front and the purist basketball front. Amazing.

This post from yesterday which went up hours before the latest round of Kobemania is the truth.

Oh wait… I just remembered writing something for the SLAM issue that comes out pretty soon about KOBE that is weirdly psychic. Nevermind. KO-BE! KO-BE! KO-BE!

HINT: When you get the new issue, it’s in the hype section.

It’s not like we’re going to stop talking about KB24. The name of the job is to give the people what they want, and this seems to be what they want. Lang and Mutoni have been doing a great job covering the latest on KOBE, and for that I am thankful.

Congrats again to the Spurs, who laideth the smacketh down. Great season Utah, who were the underdog in round one, took advantage of the biggest upset in years in round 2 to have an easy ride to the Conference Finals, and played some good games at home against the inevitable NBA champions.

No matter what happens in the East, the Finals begin on June 7th, a full week from now. Rest up San Antonio.