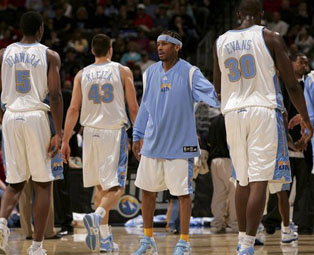 The Western Conference Wrap returns with old and new features this week.

Happy holidays to all as we approach 2007! Things around the NBA are heating up, and oddly enough, my hometown Nuggets have been knee-deep in the spotlight for the past two weeks. Since my last installment, the Nuggets and Knicks scrapped a wee bit at MSG, which rendered the Nuggets extremely shorthanded with the double-digit-game suspensions of both Carmelo Anthony and J.R. Smith. This was all followed just a week later, by the trade of Allen Iverson to the Mile High City. Throw in a Phoenix 15-game winning streak, and another one in progress down in Dallas, and the West has again provided the most exciting and compelling basketball this season, now if the conference can just trade the Grizzlies for the Wizards.

We will start with our hot teams, and take a closer look at the how these teams shape up in the conference standings.

Despite last night’s flu-altered loss to Milwaukee, San Antonio is again near the top. Tim Duncan is again rounding into shape with his standard 20 and 10, but this year, Timmy is shooting less, putting up only 14 shots per game. Coach Pop’s floor general, Tony Parker has quietly been playing great, scoring 19 per night, while shooting an amazing 53% from the floor. Yes, Tony shoots about 97% of his shots while floating through the paint (didn’t he led the league last year in points in the paint/game) but even when he has ventured out beyond the arc, the career 32% bomber is currently firing at a 56% clip.

The aforementioned Washington Wizards of the (L)Eastern Conference have been streak spoilers all year. Last week, another fiddy-spot by Gil Arenas made sure that Phoenix’s streak ended at 15. Besides that one game, though, the Suns have been phenomenal over the past two weeks. STAT is really starting to make strides as Mike D’Antoni has been able to give him more minutes every game, and Steve Nash has been playing again like an MVP. With the Lakers on the road and strugglin’ a bit (that XMAS day performance in South Beach was miserable) the Suns should be able to build a nice lead in the surprisingly vapid Pacific.

Dallas is in the midst of another winning streak, moving it to seven games with last night’s win against the BETcats. Omit the first four games of the year, and this team is a startling 21-3! Josh Howard and Jason Terry are giving Coach Avery a great scoring punch to accompany Dirk’s token 23 and 10. For the Mavericks to return to the Finals this spring, however, the maturation of point guard Devin Harris must continue.

Injuries have been straight hampering these squads.

First it was Tracy McGrady’s back, and now Yao is down for over a month with a fracture near his right knee.

I’ll start by cueing the obligatory, “Houston, we have a problem.” While Coach Jeff Van Gundy waits for his stars to return, Bonzi Wells, Shane Battier, and Rafer Alston need to keep this team afloat in the ultra-competitive Southwest. If last year was any indication, though, this team is done.

To wit: The ‘05-06 season: Without both Yao and TMac—HOUSTON: 1-8. Without one of the two stars: 13-38. Ouch. The Rockets suffered another loss last night, despite MacGrady’s return to the lineup.

Seattle has not been able to pick up the slack left by Ray Allen, who is back, but still slowed by the gimpy ankle. This team, which people forget won the Northwest Division, two years ago, is bleeding not only at the box office, but also in the standings. Might they move to Oklahoma?

Memphis must be mentioned, as their paltry 6 wins, put them as the only squad in the West with less than double-digit victories. Things are looking up, however, as Pau Gasol has recently returned to the lineup. In just 22 minutes per, the bearded Spaniard is averaging over 14, which includes a “28 in 28” night recently against the Hornets. This team has not gotten enough production from some of their youngbucks either, and is shooting an abysmal 43% from the floor.

I’ll also give New Orleans/OKC, a NOD to being NOT, as their injury problems rival any around the league. Let’s hope that CP3’s ankle issues are minor and Peja and D. West aren’t gone too much longer. I think they only dressed the league minimum last night and had 8 DNPs.

Despite this past year’s draft class not boasting the star-potential that the upcoming one looks to provide, there are many rooks doing work on teams around the league. While many are plying their trade in the other conference, I have put together my Western All-Rookie Team.

POINT: LA-native, UCLA-product, and now Laker, Jordan Farmar has picked up his game considerably, and his pace makes the Lakers’ second unit a more up-tempo outfit.

NOD: I’ll look towards Portland’s Sergio Rodriguez for the slight tip of the hat, as the young “Spanish Magician” has shown flashes of brilliance, despite limited minutes.

TWO-GUARD: Minnesota’s Randy Foye has earned this honor for showing the most explosiveness in this group. His ability to score and distribute have also made him the most productive of the three rookie Villanova guards. Foye has also been involved in a myriad of trade rumors, most of which surrounded the possibility of AI coming to the Twin Cities. Dropping 25 and hitting game winning shots, like he did last night, will ensure that Foye is entrenched in this spot.

NOD: Portland’s Brandon Roy has missed a large chuck of action with injuries, but his recent return and performances have been impressive, including a near triple double (16-10-8) against Toronto last Friday.

SMALL FORWARD: This group and the power forward position are the deepest with each sporting more than one viable candidate. Despite inconsistent performances and a brutal 39% from the field, Memphis’ Rudy Gay has to be the pick.

NODS: Denver’s Yakhouba Diawara and Seattle’s Mickael Gelabale. Honestly, chime in if you had ever heard of either of these Frenchman, both of whom are taking advantages of injuries and suspensions.

POWER FORWARD: This is a two-man battle between Minnesota’s Craig Smith and Utah’s Paul Milsap, both of whom were second round picks. I’ll take Smith on this one, as he has proven a consistent back-up to KG and Mark Blount.

CENTER: This is a tough one as there are few who fall into this category, so I will take Portland’s LaMarcus Aldridge.

FORESHADOWING NOD: To future Memphis big man Greg Oden. By this time next year, the current Ohio State freshmen should be able to supplant Jake Tsakalsisidididis in the middle.

Despite Utah’s surprising start, I would have to look at San Antonio, Dallas, and Phoenix as the class of the conference. Regardless of my home base locale, the one team that intrigues me the most right now, though, is the Denver Nuggets. Having to play the next month without Carmelo Anthony and JR Smith, not to mention the recently shelved Marcus Camby, the Nuggets will quickly rely on the scoring and leadership qualities of the newly acquired Iverson. Can he keep them together while the big guns are out? Can he and Anthony co-exist on the court together upon Melo’s return?

The possible outcomes are endless, but the organization did what it had to do, when they traded Andre Miller, Joe Smith, and two first-rounders for the rights to “The Answer.” Oddly enough, people around the Mile High City are not using that famous moniker for the diminutive Iverson, rather a similar but more hopeful one, “The Solution.”

See you in two weeks, when we start looking at ASG roster. Happy New Year!