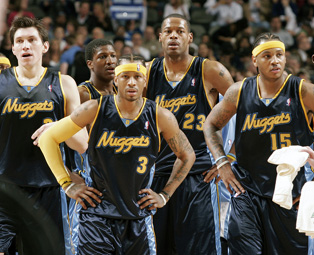 With the second half of the season in full bloom, the Western Conference standings have remained eerily similar to those from just a month into the year. Dallas, Phoenix, Utah and San Antonio are clearly the class of the group, with Houston and the Lakers as the conference’s “second tier.” Those with playoff aspirations but little dream of advancing include Denver, the Clippers, Minnesota, NOKC and Sacramento.

While I fully concede and believe that Dallas and Phoenix will eventually determine who represents the West in the Finals, I must take this opportunity to closely examine the one team that I am most familiar with: the Nuggets. I am still uncertain as to how the tale of their season will ultimately read, but over the course of the season these Nugs have become the league’s lightning rod. From that wee scrap at the Garden to the trade for Allen Iverson, I have never in my life seen the words “Denver” and “Nuggets” be such an integral part of the national basketball discussion.

Problems and controversy continue to swirl around the Pepsi Center, as recent events have focused around the team’s two stars, AI and Carmelo Anthony, and not whether they can co-exist, but rather if the latter is giving the team his best effort. Talk of Melo’s focus on making the ASG and becoming the league’s scoring champ — as opposed to the team’s success — is rampant. The 22-year-old is also taking a leave by not traveling to Oakland for Denver’s game tonight with the Warriors in order to tend to the impending birth of his and LaLa’s first child.

The following quotes were uttered over the last few days and I would be remiss if I did not thank the local Denver outlets (Post, Rocky Mountain News) for reporting the team’s recent outbursts. Consider this my State of the Union on the boys in powder blue and gold. I do expect the token congressional round of applause after every few sentences.

This gem which got plenty of national play was uttered by Coach Karl after some continued spotty defensive effort by Anthony. Karl has obviously given the fourth-year star some input opportunities but seems ready to put those on hold, especially with Iverson taking on a larger leadership role with the team. Ironically enough, I heard an interview yesterday with current Air Force Academy head, Jeff Bzdelik, who of course coached Melo during his first year and a half in the L.

Bzdelik relayed a story involving a film session the two had during Melo’s rookie season where Bz was showing his youngster a series of plays where he showed little to no effort on the defensive end. Not only was Melo a bit disturbed by his coach’s assertions, but basically let Bz know that he had just won a national championship (at Syracuse) and that his game was more than straight. I know this tale is a couple of years old, but it definitely gives some insight into a young Anthony’s mental state.

Basically, this quote is Karl’s way of flexing the only “muscle” an NBA coach actually has, messing with a dude’s playing time. Yes, there is the obvious concern that this is becoming GP/Ray Ray all over again, but his rant was warranted. Melo does relax way too much on the defensive side of the court. Last night in their win (third in last four) over NOKC, Melo was making steals and obviously trying to play hard defense, which is all about effort.

“I didn’t expect to be seventh or eighth (in the Western Conference standings). But it is what it is,” Anthony said after a late-morning practice Monday. “We just have to come together as a team. Me, A.I., Marcus Camby, everybody has got to come together…and get it going. We only have a month-and-a-half left.”

Word, Melo. Word. The other glaring deficiency is the play of center Marcus Camby (if you ignore his beautiful performance last night: 8 points, 11 rebounds, 6 assists, 6 blocks, 4 steals — one pick away from a “high five”). In the past three weeks, he has looked sluggish and not involved on the defensive end, which is a killer as he is the team’s one true defensive-minded player. Not that Camby is much of a one-on-one defender, but he is possibly the best help-side/team defender in the league. Basically, he has sucked, lately.

I took in the Houston game this past Friday (as a fan) and besides hating my corner porch seating arrangement, I was disgusted by the team defense. We will see if last night or their wins last week at Orlando and Memphis were aberrations, but this team is not ready to challenge the big boys. To date: record against PHX/DAL/SA/UTAH: 0-9. This month the Nuggets still have a home and home with the East’s elite in Detroit, as well as a game with the Lakers and two with Phoenix.

“If you’re scoring at a high rate and your team’s not winning, people come at you and want to know what more you can do. It’s a lose-lose situation,” said Iverson.

AI is blatantly playing the empathy card here, as he has more than a little experience with this scenario during his days in Philly. Luckily for Anthony, he has running mates that are nothing like those that graced Iverson’s Sixer rosters. Between Camby, Nene, JR Smith and, of course, Iverson, Anthony has help. Lots of help. In the days since his suspension, the team has not garnered more W’s, but they do seem to be turning a corner. They have to play a little defense to help support their offense. I have said this here before, but teams who want to run have to play defense and rebound the ball. Yes, the Suns give up points in high possession games, but they take care of the backboards and get steals that lead to transition/easy baskets. Good defense leads to good offense, blah, blah…

“Personally, I think Melo should forget about scoring,” said Karl.

This is a topic that I strongly agree with Coach about. Scoring for Melo comes way too easily to put any kind of focus on the task. If his intensity is centered on defense and rebounding, he will easily get his 25-30 a night. Between run-outs (2-3 lay-ups per game), offensive boards (2 per), 8 from the stripe (10 attempts per), Anthony could have around 16-20 before he even tries to get his. Last night in the NOKC win, Anthony shot less than 20 times, grabbed 7 boards and dished out 6 assists. This is the recipe. The fact that Melo scored only 21 is irrelevant, as the Nugs had the game iced midway through the third quarter.

“I don’t want to move to another situation,” Iverson said of when his contract runs out. “I like this situation so much. I’m just looking forward to training camp with all of my teammates and not having to deal with the trade and all the injuries. I want to start a whole season and see how well we can do.”

Next year is a topic that has been mentioned way too much out of this group. All are guilty, as they look ahead to a full camp with a complete roster. While I agree that they should be able to flirt with the 50-win mark next year, this season is still salvageable, as the team can more than make some noise come playoff time.

On the positive side, Nene has emerged from his myriad of injuries to play some serious ball. Not only does he give the team much needed inside game, which translates to some semblance of a half-court attack, but after slimming down a bit, Nene has also picked up his defensive play. The Nuggets have also been happy with the recent play of second-year swingman Linas Kleiza. Dude can hit 3s, hustle and give the team some much needed grit. Will the Nuggets story be one of a first-round spoiler? Probably not, but if they can push one of the giants beyond what was expected, then the rest of the conference will be more than grateful.

Forward Reggie Evans said he’s “not tripping out” about being benched three of the past four games. This quote just made me chuckle.

Peace to all near and far! The Wrap will be back in a couple weeks as we near the playoff run!