What the Ref Scandal Means for Dwyane Wade 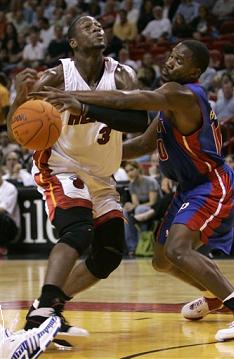 -Could D-Wade be seeing less and less calls when he attacks the cup thanks to L’Affaire Donaghy?

Don’t be surprised if Heat guard Dwyane Wade comes out as one of those who winds up paying a price.

Why? Because few players make as much of a living getting to the foul line as Wade, and few have drawn as much high-profile scrutiny as when Wade attempted 97 free throws in leading the Heat over the Mavericks in the six-game 2006 NBA Finals.

(Going by this logic, shouldn’t the overall number of foul calls during NBA games go down? Of course, this would mean that basketball would become the hand-to-hand combat that it was in the 80s and early 90s. Good times.)

-Sekou Smith is not amused, and he’s eagerly awaiting David Stern’s explanation of the ref controversy. Stern is expected to hold a press conference today. That should be fun.

-Donaghy is expected to plead guilty to gambling charges as early as Thursday.

-Antonio McDyess has re-signed with the Detroit Pistons. The deal is for two years and is worth $14.46 million.

(UPDATE: David Stern’s press conference is scheduled for 11 AM EST. It’s on ESPN and NBATV. You can also follow it live on nba.com and espn.com)