Where It All Began

In the 1990s and early 2000s, there was a backlash against everything we love about today’s NBA, and standing against this tide, alone in those days before twitterstorms, hashtags and online petitions, was SLAM.

This backlash came both from outside the L and inside the commissioner’s office of David Stern. It was a hysteria born of insecurity after the retirement of Michael Jordan and directed against the new generation of players deemed to be “destroying” the League. They were the ones coming straight out of high school, cornrows in their hair, tattoos on their arms and hip-hop in their ears. The solution would be dress codes, a mandatory year in college and League promotion of players—through no fault of their own—like John Stockton, Karl Malone and Reggie Miller: Hall of Famers with an absence of soul.

This was a time of code words from David Stern’s allies about wanting the League to have “red state appeal.” It was when the most unassailable genius in the sport was Phil Jackson and he said of young NBA players, “I don’t mean to say [this] as a snide remark toward a certain population in our society, but they have a limitation of their attention span, a lot of it probably due to too much rap music going in their ears and coming out their being…The players have been dressing in prison garb the last five or six years. All the stuff that goes on, it’s like gangster, thuggery stuff.”

All of this was a painfully transparent attack on young black men and hip-hop youth culture, as old men stressed about how they were going to market this majority black league to a majority white audience. And yet the future HOFers, the icons, were all around them, but they were seen by the League as enemies to future progress. This was symbolized most dramatically when the NBA’s own—now defunct—magazine put Allen Iverson on the cover and airbrushed off his tattoos. This was a league desperate to photoshop the very personalities of a new generation.

Yet then there was SLAM. While the League was airbrushing the most iconic player of his generation, SLAM was putting The Answer on the cover, his fro flying at full height, with the headline “Soul on Ice.” When Latrell Sprewell was trying to make his way back into the League’s good graces after his season-long suspension for choking his Warriors coach PJ Carlesimo, SLAM put Spree’s mean mug right on the front with the headline, “How He Saved the NBA.” When the League saw Minnesota as an afterthought and hip-hop as an enemy art form, SLAM gave us “Showbiz and KG.” These covers—and seeing demonized faces staring back at us on the newsstands—meant something. But it wasn’t the covers alone. Whether it was the Trash Talk letters section when SLAM’s editors constantly yipped back to the readers, or the NOYZ at the front of the mag with its constant stream of hoops #hottakes, SLAM really was our social media before there was social media. If only they had bottled the concept, editors like Tony Gervino, Scoop Jackson, Russ Bengtson, Ryan Jones and Ben Osborne would all be swimming in champagne or conducting their own vanity runs for the President of United States. Instead, the SLAM fam has to settle for knowing that they were ahead of the curve at a time when David Stern and his cronies thought the curve led straight off of an economic cliff. 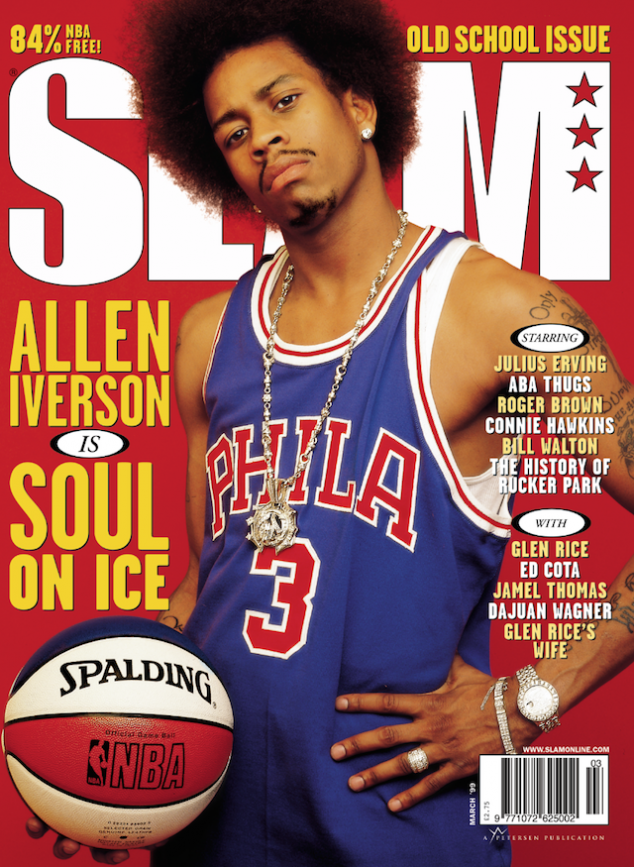 Today’s League is more entertaining than ever and it is built around a foundation of stars who are more likely to be distinct individuals then cookie cutter corporate cutouts. These are the children of AI, not Karl Malone. When players like Russell Westbrook are redefining just what a dress code is really supposed to look like, when players like Draymond Green and Stephen Curry are more likely to break molds than try to fit in the ones already created, that’s the SLAM legacy. Maybe the mag won’t be getting a thank you note from the commissioner’s office, but true fans know who deserves love for the blueprint of the style, flavor and politics of the greatest sport on earth. It was conjured and defended by a bunch of ink-stained wretches in Midtown.