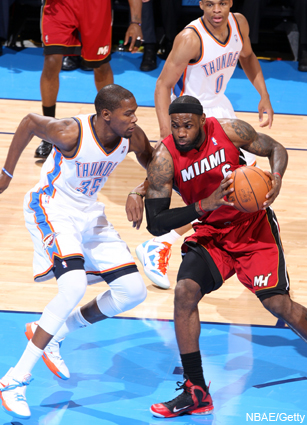 Despite all the evil things the lockout-shortened season has spawned—sloppy play, ridiculous injuries, skewed statistics—it should be praised for creating something that has long been lacking in the NBA. Parity.

Obviously, the NBA will always have crappy teams, (hello Bobcats and Wizards) and elite franchises. But this year’s compressed schedule has interjected some much needed randomness into the regular season. And that ‘impulse’ factor may carry over to the upcoming Playoffs.

As the regular season enters its final month, there may be clear “favorites” heading into nut-cutting time, but there are no juggernauts. Every single Playoff team has obvious flaws and definite strengths. Most Playoff series will come down to which coaches and players can accentuate the positive, and distract from the negative. Basically, these are the makeup Playoffs.

Chicago and Miami remain the clear heads of the class, but they seem less secure on their perches. Boston is showing some friskiness thanks to KG finding his fountain of youth and Atlanta is still maddeningly Atlanta. That means they can beat anyone and lose to anyone without breaking much of a sweat.

Philly and Indiana need consistency, but remain dangerous, and Orlando’s Jekyll and Hyde play fits perfectly with its vacillating leader. And please, please don’t mention the Knicks. But don’t ignore them either.

The problem in the Windy City is obvious. Chicago does not have a dependable shot creator outside of Rose, although they’ve performed admirably without their superstar this year. To depend on Carlos Boozer would seem foolish, and while Luol Deng is a very good player, nothing has changed in his game from last year.

More importantly, exactly how serious is Rose’s groin injury? Without his explosiveness, will he be able to carry the Bulls during their predictable scoring droughts? Will the team revert back to standing and looking at Rose instead of employing the passing and cutting offense they’ve showed off in recent weeks? Is Boozer preparing diabolical surprises like that hairline he revealed earlier this year?

In Miami, the Big Three came into the season looking like they were going to be the soul-destroying collection of beastliness critics feared post-Decision. But lately, that beast has disappeared and they are back to the middling collection of parts that limped through much of last season before catching fire early in the Playoffs.

After starting out banging on the block and showing aggression nightly, LeBron has drifted back to the wing and inane facilitating. Instead of using his amazing court vision after he’s exhausted his scoring options, LeBron too quickly makes the “right play” even if it’s not the best play.

Can the Heat get consistent production in the half-court? Will LeBron stop being so passive, so often? Can Bosh remember that he’s still one of the best big men in the League? The Heat need LeBron attacking from the post, Bosh attacking off the dribble and Wade providing his particularly delightful amalgamation of unpredictable awesomeness if they are going to avenge last year’s embarrassing loss.

Only one team has played like an elite squad the entire year, and that’s the Oklahoma City Thunder. They appear to have pulled away from the pack with only San Antonio offering token resistance. But, Oklahoma is obviously flawed, which should give hope to all of the West’s Playoffs teams.

Memphis is a dark horse given its talent and confidence, but ZBo’s recovery from his injury is still in its infancy. Plus, the team feeds off Tony Allen’s defensive energy and overall effort, but his lack of outside shooting compresses the lane. Lionel Hollins definitely has his work cut out for him.

The Clippers have an amazing young talent, an amazing floor general, and a terrible leader on the sidelines. That’s a big negative offsetting some substantial positives. Dallas has a key cog upset about money, and the entire team is still struggling to recover from its Larry O’Brien-induced hangover. The other team in Los Angles still has Kobe and an intimidating frontline. Only, it’s the new Kobe, which means he shoots just as much as the old Kobe, but much less efficiently.

Oklahoma has really benefited from Kevin Durant’s surprising growth as a facilitator and he’s tempered his offensive aggression with smart passing to open teammates. On the other hand, Russell Westbrook’s complete abandonment of any pretense of being a point guard might be good for the Thunder. Yes, he takes some bad shots, but the anger and aggression he displays at all times can be a catalyst for his team. In fact, the two superstars can make a legit claim to being the most consistently dangerous duo in the League.

James Harden remains the majestic galloping unicorn of glue guy due to his ability to do a little bit of everything, and still drop 30 points. Serge Ibaka blocks lots of shots, Nick Collison is the Meryl Streep of role players, and Kendrick Perkins leads the League in intimidating scowls. Oh yeah, the Thunder also picked up Derek Fisher, and that means it mandatory that his Championship mettle be praised without focusing too much on how often Lakers fans prayed for him to be cast aside.

But, the Thunder struggle even worse than the Heat in the halfcourt, turn over the ball like it’s greased, have a very short bench, and are begging to be outmaneuvered in the coaching department. If their jumpers are falling, they can and will beat any team in the League, particularly at home. If not, all bets are off.

San Antonio may be the most underrated and overlooked 2-seed in League history. The Spurs are doing their typical work as a well-coached veteran squad, and they’ve even upgraded thanks to some good free-agent pick-ups and trades. Tony Parker is having an MVP-caliber year and Duncan is still good for 15 and 9.

On the surface it seems like the Spurs would be justified in playing the Rodney Dangerfield card, but the truth is they earned their disrespect by being toppled by Memphis last year. Their defeat wasn’t exactly a surprise, but they were still a 1-seed with a stellar record getting toppled by an 8-seed sans its second best player. That qualifies as a debacle.

The Spurs have one of the most cohesive attacks on both sides of the ball in the League, but there is something about them that doesn’t inspire confidence. The team always went as far as Duncan could carry them, and he obviously isn’t The Big Fundamental of yore. It’s unclear if Parker can shoulder that sort of load alone, or if Manu has enough in the tank for one last run.

The air of uncertainty surrounding this year’s Playoffs is really encouraging. Few folks picked Dallas as the eventual champion last year, but their victory was mostly talked about in terms of LeBron’s failure. Barring a similar collapse this year, pundits and fans should be treated to a final stanza where every series is either a toss-up or is guaranteed to feature hard fought, close games. There is the potential for history to be made every where you look, and that’s refreshing.

It seems people were right about outstanding upside potential of parity after all.