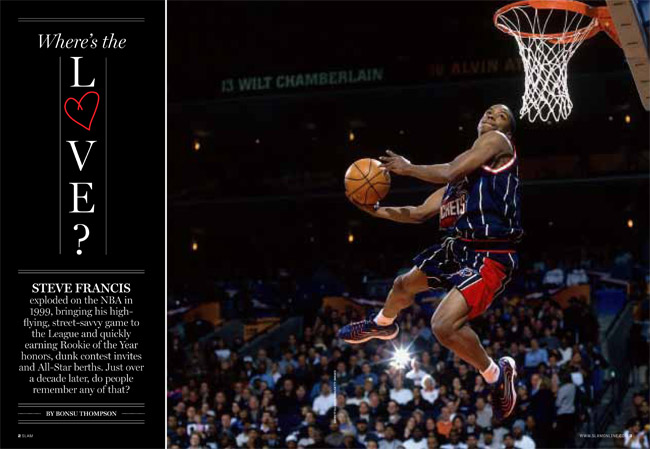 No story has generated more Trash Talk in the past few months then this Stevie Francis feature that ran in SLAM 140. With that in mind, and with word leaking that Franchise hopes to play for Miami next year, we felt like the time was right to post the full feature online. Enjoy. —Ed.

Nobody knows where Steve Francis is. Not his business partner Kenny Westray. Not his manager-slash-agent Nate Peake. Not even Steve’s nameless buddy on the other end of Nate’s cell. The sour sky blanketing the DMV region this soggy April afternoon sets the perfect backdrop for the mood inside We R One (the retail hub for Steve, Kenny, Nate and Nick Van Exel’s clothing line of the same name). From biz partners to store employees to the journalist awaiting an already hour-late interview, everyone’s itinerary has been paralyzed by the local legend nicknamed Stevie Franchise. Yet, while Nate’s furrowed brows and tight jaw projects “Where the hell is my client?” Kenny has a question that’s different yet still relevant to Steve Francis’ absence: “How the fuck you just get tired of making millions?”

Steven D’Shawn Francis hasn’t been seen earning NBA millions since 2007. Powered by bunny hops and an underground crossover, the Takoma Park, MD, product gave us nine NBA seasons, including an electric first six which generated ROY honors, three consecutive All-Star game elections (one start) and a runner-up finish to the greatest performance in NBA Dunk Contest history. Then Stevie went MIA as quickly as he arrived. If the League has a backdoor, Francis slipped through it.

“Here he go,” says one of the eager We R One employees, staring out of the store’s rain-slicked front window. Francis enters the room and the tension exits behind him. Everybody’s now rocking a smile—Steve’s the widest as he greets his peeps with orchestrated pounds. Fortunately, he’s ready for his interview. Unfortunately, first he wants to get a shave at the barbershop next door (also owned by him). “This all I do, Bon,” he says, arms spread eagle, entering the chop shop in his patented diddy-bop. “Just chill—kick it with my peeps and check on my businesses.”

These businesses include a construction company, boxing promotions and of course the barbershop and clothing line. But what Steve claims he’s most passionate about these days is his budding rap label. He has dreams of becoming the Master P of DC—millions invested into 30 artists, none more a priority than the others, in a region that, Wale notwithstanding, has traditionally been as hip-hop fertile as Joan Rivers. It’s a baffling business model, though not more baffling than why a 33-year-old with career averages of 18, 6 and 5 is living the entrepreneurial life of an ex-player 10 years his senior. Not more confusing than why a PG who claims he’s currently “100 percent healthy” and was “the best point guard in the League from 2002 to 2005,” walked away from the game at age 30.

“NBA players only have a small window,” Steve yells over the barber’s buzzing clippers. “So after seeing stories about guys being broke, and then I just seen some shit about Antoine Walker…I was like, let me put my head into my business for my family.”

Healthy financial investment, family and future security: all valiant but unsurprising goals for a millionaire, especially a professional athlete. What’s hard to believe is that the chase of a strong portfolio could replace the competitive spirit of a player who led both his junior colleges (San Jacinto in TX and Allegany in MD) to undefeated records before becoming a Maryland Terrapin. A baller who after an NBA All-Star season sharpened his game on summer blacktop from The Dome in Baltimore to Harlem’s Rucker Park. Nope, not buying it.

Steve concedes. He finally relinquishes the truth: Both the Houston Rockets and his own ego play huge roles in him being inactive today. It began with Jeff Van Gundy replacing Rudy Tomjanovich as the Rockets’ head coach in ’03. Van Gundy quickly replaced Francis as the team’s offensive focus in favor of Yao Ming. Francis’ freestyling, run-and-gun game was of no interest to Van Gundy, and after a season of PG/coach head-butting, Steve-O was traded to Orlando. Though rough for him at first, Disney World became home to his second-best statistical season (21.3 points, 7 assists, 5.8 rebounds). In the middle of the ‘05-06 season, Steve was bounced to the Knicks, into the middle of the Larry Brown nightmare. In ’07, Francis found himself back on a Rick Adelman-navigated Rockets team. “They ain’t start me [and] that rubbed me the wrong way,” says Steve through a jaw full of shaving cream. “I’m playing behind a guy that wasn’t drafted—Skip To My Lou. You can’t put a three-time All-Star on your bench. So [I decided] if I’m getting x-amount of dollars, I’ma fall back and just get my money for my kids.”

While the Rockets won 55 games, No. 3 wasn’t exactly looking his strongest. In December of ’07, Francis suffered a knee sprain, then went through a bout with the flu. As soon as he was germless, he tore his quadriceps, requiring season-ending surgery. With speedy rookie Aaron Brooks shaping into a floor general for the future, the Rockets shipped Steve’s rights to Memphis. The Grizz had as little interest in the aged Stevie Wonder as the Rockets. Just like they would bench another past-prime little man known for his huge game a year later, Steve had to compete against the team’s youth investments—Mike Conley and Kyle Lowry.

Standing over Steve listening in, Nate adds his two cents: “Why should he have to prove himself to an organization that’s not winning but gonna put guys in front of him that haven’t proven themselves?” The client-agent tag team. “If you bring your product to the table and they don’t respect your product, you gotta go in a different direction,” says Francis, who notes that Nate negotiated a healthy buy-out from Memphis. “I got a bag [of money] from ‘em. I’m not gonna be whored out by nobody.”

Steve is now lined-up. His face is shaven smooth. Yet he remains in his barber’s chair for a leg massage. Only the hum of the electric contraption being run over his legs can be heard. Steve is quiet—in his head, too busy remembering Opening Day of the ’08-09 season. He breaks out of his cloud and answers the question: “The first day [of the season, when] I watched those games and I wasn’t in training camp…man, I was sick.”

While it’s understandable watching the NBA season would make the veteran a bit ill, one would imagine his sickest period of all might be now, during the NBA postseason. Steve was picked second overall in the ’99 Draft. Baron Davis, Lamar Odom, Rip Hamilton, Shawn Marion and Jason Terry all trailed him in the Lottery that summer. Ron Artest went 16th. All the aforementioned players remain heavy contributors to their respective clubs. The Jet, Matrix, LO and Ron-Ron all competed in the ’10 postseason, with the latter two looking like Finalists, if not champs.

To see Francis’ peers balling so sufficiently makes the former PG’s absence even more acute. “He’s a rare guard,” says Baron, who met and bonded with Steve on a trip to B-More after his freshman year at UCLA. “He’s 6-3, can shoot, can pass, get to the hole at will and dunk on you. Makes no sense for him not to be still playing.”

When asked how he stays NBA-ready, Steve quickly notes that Nate doesn’t allow him to play streetball anymore because he has nothing else to prove. These days the bulk of his shooting takes place on his home court with his 2-year-old son. “I can go out on the court right now and bust anybody’s ass,” he says. “If a team called, just give me two weeks and I’ll be ready to rock.” He ciphers back to cash. “It’s just that at this point, with two kids and a wife, it’s about the money being right.”

It’s four hours later and the sun has set. The We R One store is closed to the public but nobody in this crew has left. Kenny, Steve and the WRO crew are huddled together staring up at a mounted television, where ESPN is airing No Crossover: The Trial of Allen Iverson. The latter part of the documentary touches on AI’s refusal to be a bench player and his undetermined legacy (“Me and [Bubba] Chuck on the same page,” says Steve). The doc’s last 10 minutes could just as easily be about Francis’ legacy, a subject he’s crystal clear on. “To be the greatest player out of the DC/Maryland area since Len Bias,” he states, “Kevin Durant can’t say that. Michael Beasley can’t say that. None of those guys can say that. I am the best player to come out of DC since [Bias].”

“He’s like a Nick Van Exel or a Rod Strickland or Mahmoud Rauf,” says Davis. “He’s gonna go down as one of those guards that was dangerous but never got the credit they deserved.”

Steve is not tired of makin’ millions, but he has grown weary of the NBA’s disposable nature. He’d rather be bought out than sell himself short. While there’s still an internal battle to be won, there’s surely a lot more hoopin’ inside of Steve Francis, or maybe we just want there to be. He’s got his money. Now he just wants respect and opportunity. It’s a convoluted Catch-22. For everyone, that is, except Steve.