Why don’t we care about Steve Francis? 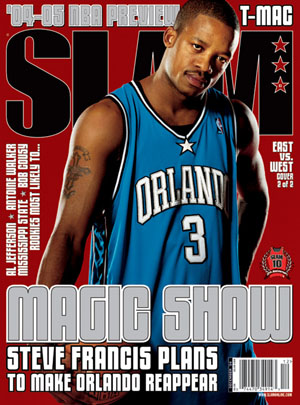 It appears that the Knicks are about to buy out Stevie Franchise. It sounds like he’s injured or something. Does anybody know? Have you ever seen a guy go from being a superstar to falling off this hard into irrelevance in such a short period of time? Did Bruce Bowen end his career? Vin Baker seemed to lose his skills when he couldn’t overcome his alcoholism. Shawn Kemp is sort of in that grey area, but he still had great numbers in Cleveland. Good buddies of mine like Roberto Alomar and Carlos Baerga just weren’t built for the pressure. But Steve Francis? What happened?

He was traded with Cuttino Mobley for McGrady. At the time it seemed like Orlando Magic were losing their identity for about the 8th time and getting robbed in a trade or by a departing free agent once again. In hindsight the obvious was true. Francis had a great first half teaming with Grant Hill, and he finished that year with numbers 21, 7, and 6 with a rookie named Dwight Howard developing. The ’05-’06 season was just weird, with Steve toning his game down to let Dwight Howard do more and then eventually he snapped, and after a suspension for insubordiantion, they shipped him out cause they didn’t want him around anymore. But this was a player that until last season, basically put up 20-6-6 at the bare minimum every year. With Yao and Jeff Van Gundy in Houston, he took fewer shots and dropped to 16 ppg as the Rockets went to the playoffs. In their one win over the Lakers (the Karl Malone team) he put up a 27-9-7.

He was traded that off-season, and now look at him. He never even had a chance with the Knicks. It was a ridiculous trade that everyone knew was stupid at the time, and may or may not have been the result of an Isiah-Larry Brown power struggle.

He hasn’t done anything for the Knicks, other than give the Magic cap room. I don’t think anyone even cares that he’s in the NBA. Is he? What happened?