Will it be Golden? 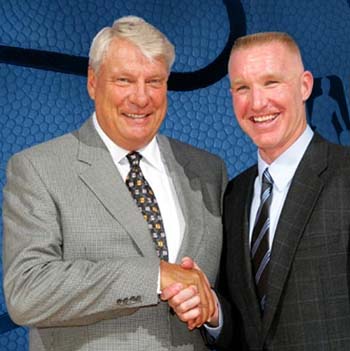 I don’t think I’ve properly expressed how ridiculous this Don Nelson thing is. Golden State of Mind is all over this thing, as they should be, but I’d also like to chime in here.
I commented on it in the comments section of Lang’s initial post, which had Nellie sitting there with that pimpy moustache and wine, but here’s my point: The Warriors were on their way back in 1994. They won 50 games, and this was without Tim Hardaway, who missed the whole season with an injury, coming off a year when he was a 20-10 guy. Mullin was a 25 ppg scorer, the original Sarunas was at about 18 per, and and there was so much young talent, like Sprewell, Billy Owens, Chris Gatling, even Tyrone Hill. Then… they added Chris Webber to that mix? The starting five of Tim, Spree, Mullin, Owens, and Webber would have been maybe the most talented in the league, and they were deep too. With Nellie’s crazy schemes, the play of Webber and Owens would have exploded over the years cause they were both versatile big men and not just bangers.

Why did that team fall apart? Cause Nellie couldn’t get along with Webber. They traded him to Washington, Nellie was replaced by Bob Lanier during the season after going 14-31, and the Warriors haven’t been back to the playoffs since. This is their franchise savior? It’s not exactly Brian Hill returning to Orlando to bring back the glory days.

Now, Don Nelson is a really good coach. I like him and the style he teaches. He had a phenomenal run in Dallas (and a kind of annoying half season with the Knicks), and he’s much better suited for this job than Mike Montgomery, who people were predicting disaster for from day one. Personally, I’m skeptical of his ability to turn it around, and a big reason for that is Baron Davis’s health is just as shaky as Hardaway’s was. And L’il Dun is no Chris Mullin, despite the skin complexion.

As for Mullin. Oh boy. Has there ever been an ex-player in a decision making role, that hired his old coach to run the team? You don’t see Kevin McHale or Danny Ainge trying to get K.C. Jones to come back, or Joe Dumars and Isiah competing for Chuck Daly. This is really weird to me. Nellie was your boss and now you are his.

So… what do you all think of the Warriors chances this year? They haven’t finished higher than fourth in their division since Nellie’s last full year there. Let’s see how you think they’ll do. Back in the playoffs? Or will they still never get going like the Saafir, Xzibit, and Rass Kass trio that got its name from them?