Will The Answer Land in New York? 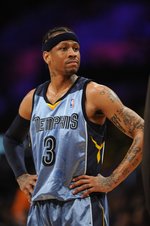 From the moment he became an unrestricted free agent this past summer, the ideal situation for Allen Iverson has always been New York. Big city, all eyes on him, the ball in his hands, and a coach who (theoretically) can bring out the best — or, at least, what remains of it — in The Answer.

Last night, Donnie Walsh confirmed his franchise’s interest in bringing Iverson to MSG. For a 1-9 team (the worst start in team history) going nowhere fast, this could be the jolt they desperately need.

Can Allen Iverson save the Knicks’ season, rescue them at the box office or at least make them relevant again?

Donnie Walsh will spend the next 48 hours debating what impact, both negative and positive, Iverson could have on the organization. Walsh, the Knicks’ president, confirmed Monday night that the club will explore the possibility of signing Iverson, the former league MVP who was placed on waivers yesterday by the Memphis Grizzlies. “We’ll look into it,” Walsh told the Daily News. “Right now, I’d say probably not but we’ll see.”

The Knicks are obviously a disaster, so why not take a chance on A.I? If he doesn’t work out in Gotham, it’s not like things could actually get any worse for the Knickerbockers. Rock bottom has already been reached; there’s nowhere else to go for this franchise but up.

There are understandable concerns about this move possibly stunting the growth of Danilo Gallinari and Toney Douglas, but I’d argue that playing alongside Chris Duhon is infinitely more damaging to their development.

Assuming they don’t make the mistake of asking him to come off the bench, Allen Iverson — whose manager says he’d love to play for Mike D’Antoni — could help New York regain some semblance of respectability. And even if he doesn’t, at least the product will be entertaining.

Which is a lot more than what you can say about the current Knicks.