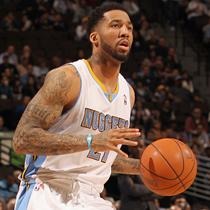 As expected, Wilson Chandler has been inked to a long-term deal, and the total remake of the Denver Nuggets appears to be complete.

The Nuggets front-office has been busy wheeling and dealing quite a bit of late, and their final big move of the season was signing Chandler to a contract.

JaVale McGee, waiting for a finalized trade, would be a Nugget soon. Chandler too. Counting Chandler’s scoring average of 15.3 points from last season, that would give Denver an incredible 10 players who average at least 8.8 points a game. “I think it’s fun,” [head coach George Karl] said. “But in a normal regular season, you want a 30- (to) 40-game package of the eight, nine guys that you’ll rotate in a game — and know how you’re going to do it. With JaVale and Wilson, you can’t even come close to that. … But in the same sense, it can be advantageous to us, if we commit to 22 games and don’t get egos and don’t worry about minutes and get flustered about not playing. (I say to the players), ‘Whatever you get, take it seriously and see what happens.’

On Sunday, Chandler signed a five-year deal worth $37 million, Chand ler’s agent said. The signing was first reported by The Denver Post. Also on Sunday, the Nene trade went through, making McGee, a former Wizards center, officially a Nugget. Chandler and McGee are expected to be available tonight when the Nuggets hosts the defending NBA champion Dallas Mavericks. To make room for Chandler, the Nuggets waived Ronny Turiaf, as expected.

Ever since Carmelo Anthony was dealt away to the New York Knicks, Denver has transformed itself into a young, hungry, and exciting team with a major focus on ball movement.

And as the Nuggets look to move up in the standings with the Playoffs looming, Wilson Chandler is expected to be a major cog in the Mile High City.