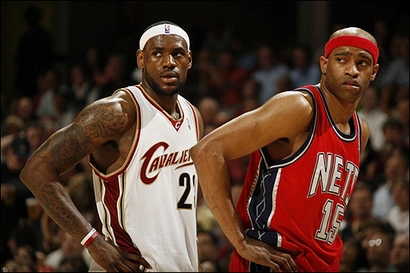 It really feels like the NBA is stalling before giving the MVP trophy to Dirk. I saw somewhere the other day that about 75% of the people with votes had been polled, and Dirk was going to be the winner. Come on Stern, the sooner it’s out there, the sooner people can make their jokes, and the sooner it blows over. But hey, they threw us the bone of the All-Rookie teams.

Congrats to all the rookies. In a season that has earned the distinction of worst performance by defending conference champions, worst injury bug to star players, and worst blatant case of tanking, we can also add worst All-Rookie teams in a while. Actually, these teams are the least embarrasing on that whole list I just rattled off. Onto the W.I.N.N.E.R.S.

PHOENIX: Steve Nash had 20 and 16, and people are more concerned with Suns fans wearing nasal strips. Kurt Thomas helped a lot, as did Shawn Marion’s defense, but Nash made them go.

CLEVELAND: LeBron. Now rest up until Saturday. That applies to both series.