Original Old School: Winning Is Everything 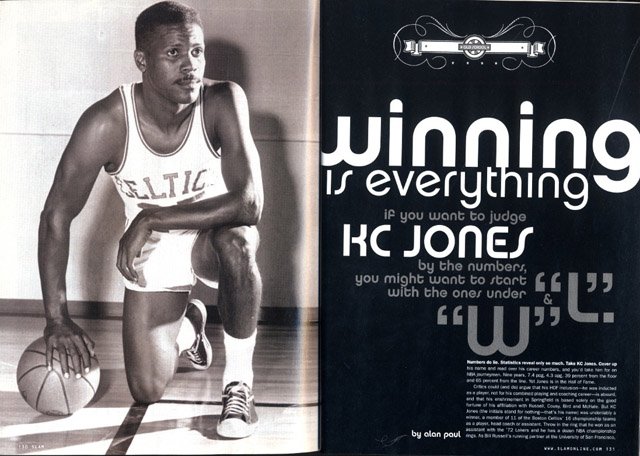 Celtics fans are lucky to have a squad that’s contended for titles the past four seasons, but recent years in Bean Town can barely compare to the Boston dynasty from 1956-1969. Though he only averaged 7.4 points and 3.5 rebounds in his nine-year career, NBA Hall of Famer KC Jones was an integral part of a many of those champion Celtic squads. The 10-time NBA title winner (eight as a player, two as head coach) was known for his tenacious defense that continually frustrated opposing players. The current C’s could certainly use a KC Jones-type of player right now.—Ed.

Numbers do lie. Statistics reveal only so much. Take KC Jones. Cover up his name and read over his career numbers, and you’d take him for an NBA journeyman. Nine years, 7.4 ppg, 4.3 apg, 39 percent from the floor and 65 percent from the line. Yet Jones is in the Hall of Fame.

Critics could (and do) argue that his HOF inclusion—he was inducted as a player, not for his combined playing and coaching career—is absurd, and that his enshrinement in Springfield is based solely on the good fortune of his affiliation with Russell, Cousy, Bird and McHale. But KC Jones (the initials stand for nothing—that’s his name) was undeniably a winner, a member of 11 of the Boston Celtics’ 16 championship teams as a player, head coach or assistant. Throw in the ring that he won as an assistant with the ’72 Lakers and he has a dozen NBA championship rings. As Bill Russell’s running partner at the University of San Francisco, Jones was also a key contributor to teams that won 60 straight games and back-to-back NCAA titles in ’55 and ’56.

In Boston starting in 1958—after a two-year stint in the Army—the 6-1, 200-pound Jones backed up Bob Cousy for five years, then took over and ran the Celtics offense for four more. His style was classic floor general, but he really made his mark on defense. Jerry West, Oscar Robertson, Hal Greer and every other great scorer of that era had to contend with Jones’ athleticism (he was actually drafted by the L.A. Rams as a defensive back), intelligence and determination. Jones put as much ego and pride into his D as great scorers put into their O. He likely would’ve been a shoo-in for all-defensive team honors and Defensive POY consideration had either existed; both started after Jones retired in ’67, following the only pro season in which he didn’t win a ring.

After three years as the head coach at Brandeis University and one as an assistant at Harvard, Jones joined former teammate Bill Sharman on the bench in L.A., where he was an assistant coach on the Lakers’ terrific ’72 title team. After a brief coaching stint in the ABA and leading the Bullets to the ’75 Finals, Jones went back to Boston as an assistant to Bill Fitch, whom he replaced in ’83-84, leading the Cs to a 62-20 record and the title. Two years later, he won again.

As coach of the Bullets, Celtics and Sonics (’90-92), Jones won 522 regular-season games, never had a losing season and finished with a .674 winning percentage. He also worked as an assistant with the Bucks and Pistons and, from ’97-99, as head coach of the New England Blizzard of the defunct ABL. But his lasting legacy is the 12 rings and his place on some of the all-time great NBA teams.

“I won rings my first eight years in the League, but there was never a championship that I was bored with,” says Jones, who is now a broadcaster and assistant to the Athletic Director at the University of Hartford. “You establish a very high standard of excellence and work hard every year to meet it.”

SLAM: Do any of your 12 rings stand out as particularly satisfying?

KC: My first year as head coach of the Celtics, because it was real surprising they named me coach and real satisfying to win after that.

SLAM: Even you were surprised to be named coach?

KC: Well, yeah. Red [Auerbach] asked if I was interested, I said yes, and he didn’t say anything more. We went and had lunch, but I thought he was just showing me the courtesy of inquiring.

SLAM: What made Bill Russell such a winner?

KC: His intelligence is off the charts, and 80 percent of the game is mental and 20 percent is talent. He was just smarter than anyone and knew what was going to happen a step before it did. Physically, he was quicker than anybody, so he could rebound and move quickly to block shots that seemed impossible to get to.

SLAM: Who was more integral to the Celtics dynasty, Red or Russ?

KC: They needed each other. Why do you think college coaches spend so much time recruiting? It is more important than being a great coach, because you need talent to win. Red realized that Russell had something special that no other team understood. He came in and was really good right away and made everything click. But Red was also phenomenal as a coach. Sixteen championships as a coach and GM speak for themselves.

SLAM: You’d think so, but Phil Jackson has nine rings, and people say it was just because he’s had Michael and Kobe and Shaq.

KC: That’s stupid. Jackson has set a standard for coaching that brought the players together, which two guys before him could not do. Kobe and Shaq were together before Phil arrived and how many rings did they win? I don’t know how people can say a winning coach is not great because they had great players. Jackson and Red both had great communication with great players to keep everyone moving toward the same goal, and that’s the bottom line for coaching. I took the Celtics to the Finals four out of five times. I had Larry Bird and Kevin McHale and all these great players, but the coach before me had the same thing and he only got to the Finals once. As a coach, if you want a good rep, you have to entertain the media with great quips, which I never had at all. If you please the media, you are a coaching genius. If you don’t, you are a guy who just rolls out the balls.

SLAM: You were elected to the Hall of Fame despite only averaging 7.4 points per game. What made you a great player?

KC: Everybody on a team has a part to play. You go with what you have to offer, and for me that was defense. Defensive players seldom get into the Hall of Fame, which is usually for great, offensive-minded players. But the game is not all about scoring. You can get offensive minded defensively and put your team in position to score by creating a mistake. I also think Red helped me quite a bit, which I appreciate. But I’d like to see more defensive players get recognized.

SLAM: Do you take special joy watching guys like Ron Artest and Ben Wallace dominate a game from the defensive end?

KC: Truthfully, I haven’t seen anybody come close to what I did. Michael Cooper may have been a little better because of his height. He could guard the Larry Birds and 6-9 guys as well as guards, which I couldn’t do at 6-1. But I blocked shots, too. I remember once I got switched up on Billy Cunningham. He’s 6-6 and sees me on him and goes to the basket, but my timing was there and I blocked him.

SLAM: Was it hard to spend five years backing up Bob Cousy?

KC: Yes. I was pissed not being out there, but there’s nothing wrong with that unless you become verbal about it. If you’re content to sit on the bench, then where are you? Some players get so pissed about not playing that they can’t function when they do get in. You’re supposed to be happy when you step on the court. I enjoyed my minutes, then went back to watching Cousy because there was a lot to learn there. He was as fancy a passer as Magic, which was called “French pastry” at the time, and Red was not happy about that at first. He didn’t like the fancy stuff, but with Cousy, there was communication without a word being said. When he had the ball on the fast break, everyone knew where to be and the ball went to the right place. Cousy laid on the French pastry, but he rarely made a boo-boo.