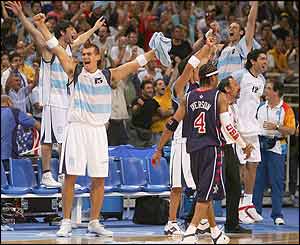 Our pal Henry Abbott over at True Hoop has undertaken a pretty cool project, which addresses a very important issue for basketball fans everywhere. He has polled a number of basketball minds–people ranging from Hall of Famer Rick Barry, high school and college coaches, trainers, and a bunch of writers–to get their thoughts on what needs to be done to fix the problems currently plaguing USA Basketball.

For some reason, he even asked yours truly. Below is my contribution to the discussion. Make sure to keep checking True Hoop over the next several days for more installments of this multi-part series.

Do you agree that American basketball development could be better? In a nutshell–what should we do differently?

I don’t think the problem with Team U.S.A. has as much to do with development, as it does with planning. Everyone knows these European teams play together for years and are only getting better, so the question becomes, Why isn’t Team USA doing the same thing? Well, there are a number of reasons, but these two are the easiest to understand: 1)They’re professional basketball players whose loyalty lies with the people who sign their checks (not Team USA); 2)It’s not nearly as important for Team USA to be successful in these international tourneys as it is for say, Team Croatia. Just look at the uproar (or lack thereof) after yet another bronze medal at the World Championships this past summer.

Chuck Klosterman wrote a column for ESPN.com that introduced some great ideas about fixing Team USA, and though I didn’t agree with absolutely everything he wrote, I think it would be enlightening to take a look at a couple of his proposals: a)”Pick 15 players who would rather die in an Iraqi dungeon than lose to the likes of Puerto Rico”; b)”Have this national team play barnstorming games around the world. During NBA All-Star weekend, they could serve as the opponents for the Rookie Game; on Sunday night during the Final Four, they could play a nationally televised exhibition against whoever won the NIT championship.”

The U.S. losing to Greece in the world championships–was that a sign that we need to do a better job developing American basketball players, or was that just a good team having a bad day?

Neither. That was a sign of a team/country too arrogant to put together a competitive international basketball program. For a very long time, the US had been able get away with putting together a team in less than 2 months and sending them across the sea to destroy other nations (there’s no better example of this than the original Dream Team). That’s impossible now. We’ve got foreigners winning MVPs (Nash), three point contests (Dirk), and getting major time on Sportscenter’s highlight reel (Ginobili); the world has caught up. The greatest talent remains (and will continue to do so for a very long time) in the U.S., but that’s not what this is about. Just look at the 2004 NBA Finals when the Pistons beat the Lakers. The most talented team didn’t win; the team that had the best chemistry, cohesion, teamwork, and was best prepared to compete won the title. The best TEAM. Until USA Basketball starts taking these other countries seriously, and starts putting a real effort into building a team whose main focus is winning in international competition, they will continue to face humiliation on the international stage.

What role should shoe companies play in basketball development?

Look, everyone knows shoe companies only care about the bottom line, and really, I don’t think it’s fair to ask them to care about anything else. Their dollars pay for these tournaments all over the US; they pay for the uniforms; they pay for the shoes and other apparel; and in many cases, they pay for the players’ travel. In return, they get their logos plastered all over the gyms, attached to the tourney’s name and it’s a great way to hawk products and get media exposure. In the end, I don’t think it’s the shoe companies’ job to play a role in basketball development. That’s the job of the coaches, parents, mentors, and other people who care (or should care) about the kids’ well-being. In my opinion, they’re the ones who are accountable for the basketball development, not the shoe companies.

If you had 15 minutes alone with O.J. Mayo, what would you say to him?

Can I borrow $10? I’ll give it back next week, promise! Oh, and watch out for the snakes in the grass…