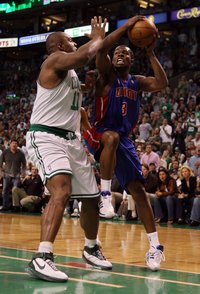 The Detroit Pistons have a rookie to thank for returning home with the Eastern Conference Finals all tied up.

With Chauncey Billups still not quite 100% healthy (though still pretty damn good, as he racked up 19 points and 7 assists), Rodney Stuckey took it to the Celtics last night, and his surprise performance gave Billups a chance to rest for long stretches of the game.

The rook scored 13 points in 17 minutes of burn, and the C’s had no answer for him.

“I thought Stuckey really gave us problems,” admitted Celtics guard Paul Pierce. “I think he was the X factor in the game.”

“He’s grown up a lot in these playoffs,” said Billups. “He was just awesome out there. He was a problem out there. I’m sure he’s going to be in their scouting report because he can make plays. It’s a breath of fresh air for me to sit back and watch a young player like that play so effectively.”

With The Big Three combining for 75 points last night, and still losing the game, it is now the Celtics who need an unlikely hero to step up on the road.