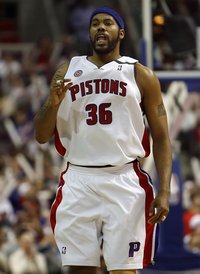 We have Game 6 of the Pistons/Sixers series in Philly tonight, a series that had no business whatsoever lasting this long. Alas, it is the Detroit Pistons we’re dealing with here, a team that only seems to care when their backs are up against the wall.

Fortunately for them, they have enough talent and veteran experience to switch it on and off whenever they want. This will probably end up costing their coach his job, but I have my doubts as to whether another coach could get Rasheed to give a crap for 82+ games.

As for the Sixers, with the exception of a brave few, most of us are now thinking of them in the past tense.

In theory, their season could last two more games, but realistically it is over.

They could conceivably win tonight, sure, but will it mean anything in the end? Probably not. But they’ve had a great year; Dalembert has an interesting haircut; Mo Cheeks has proven himself as a coach; and Philly hoop fans have a reason to care again.