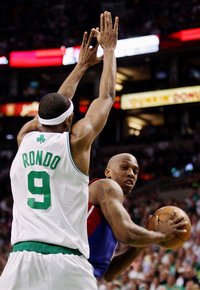 Were this any other series, tonight’s Game Two in Boston would be considered a “Must-Win” for the Pistons. But since we’re dealing with the road-challenged Celtics, Detroit can rest easy in the knowledge that, in all likelihood, this baby will be coming back to Beantown all knotted up.

The C’s insist that Ray Allen should keep shooting, and they’re right (he should), but it will be interesting to see how much longer they can survive his nightly 30% from the field abortions.

(Get it together, Ray. A jumpshot that pretty should never clang off the rim this much. Do it for the kids!)

For the Pistons, the main concern is Chauncey Billups’s groin, and his ability to play through the pain. According to CB, he’ll be more aggressive tonight than he was in the series opener. I wouldn’t bet against him.

All things considered, the C’s should win tonight. Whether that will mean anything by Game Five, though, remains to be seen.