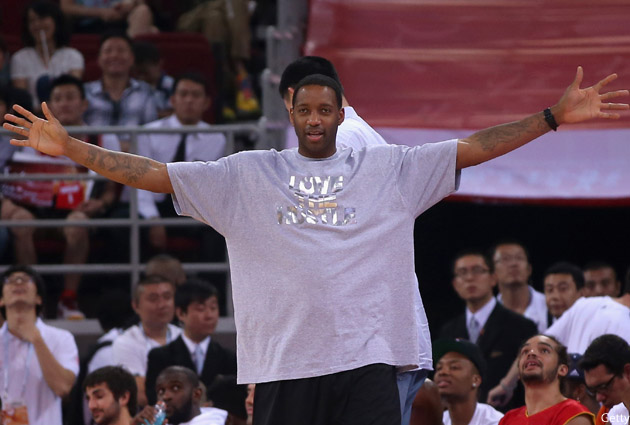 The starting five checked out of the game at halftime, were each member was patted on the back by Coach Yao Ming and Assistant Coach Tracy McGrady as they headed to the bench. Joakim Noah, Metta World Peace, Luis Scola, George Hill and Kyle Lowry—the not-entirely-American starting five of the team erroneously named “Team America All Stars”—were then replaced for the third quarter by a bunch of elementary school kids. On the other side, the Chinese National team were replaced by their mini-mes, too. On the “American” bench, John Wall and Ricky Rubio watched in street clothes while McGrady enthusiastically coached the 10-year-olds. Metta joined in to give a pep-talk, too. All this was happening while Chinese cheerleaders dressed like one of the Mario Brothers danced in the middle of the floor and the crowd of several thousand chanted McGrady’s name like he had just been named Finals MVP.

Wait, wait, I’m getting ahead of myself here. Sorry. That’s what happens when you’ve just witnessed the zaniest exhibition game on this side of the globe (or any side of the globe, for that matter) to kick off the NBA offseason. On July 1, the Yao Ming Foundation organized its third charity game between the Chinese National Basketball Team and a group of Yao’s super-friends (from his time at Houston, mostly) playing under the Team America moniker against Team China, featuring the host country’s finest players. With little expectations, I set out to witness this event at the MasterCard stadium in Beijing, the same stadium that hosted the 2008 Olympics gold medal game.

(Bonus: Here’s a hilarious picture of Kaka with Yao and Wang Zhi Zhi from last night.)

Yao has held this event twice in the past six years, with Steve Nash and Baron Davis amongst those to have starred in it in the past. But as far as I know, this year was the “biggest” show. It had everything. Drama (Joakim Noah’s clutch defense), excitement (Noah on the offensive end, Tracy McGrady coaching) and World Peace (Metta). And all this for a good cause, to support the primary school in China that’s funded by Yao’s foundation and his other charitable efforts for children in poverty-stricken areas in China.

Here are some of my notes from the game:

– Metta was working on his jump-shot a lot pre-game, and it was looking like the opposite of pretty.

– Chinese fans really, really love Tracy McGrady. This goes back to T-Mac’s time with Yao in Houston, and of course, McGrady’s stint playing in China last season. I was thoroughly impressed by the variety of McGrady jerseys in attendance, with fans donning his jerseys from Toronto, Orlando, Houston, New York and Detroit. No one seemed to commemorate his time with the Spurs, though. Fans chanted his name throughout and cheered for him louder than anyone else. When Team America took the floor, Metta was announced first and McGrady last.

– Those were the same fans wh would soon be very disappointed to discover that McGrady wouldn’t be suiting up and instead would be Yao’s assistant coach.

– Kaka—who played no part in Brazil’s Confederation Cup victory the same morning—gets asked to speak to fans before the game.

– Yao is the biggest human being I’ve ever seen.

– (Speaking of Yao, this all took place the same day he skyped with Dwight Howard and pitched him to join the Houston Rockets)

– While Yao had gotten Metta, Noah, George Hill etc. to volunteer to play in the game, the surprise attendees were four point guards: John Wall, Ricky Rubio, Damian Lillard and Jrue Holiday, who just so happened to be in Beijing at the same time for an adidas promotional event. Wall, Lillard and Holiday watched from the Team America sidelines in street clothes, but Rubio couldn’t resist and changed into gear to check into the game minutes in the first quarter.

– Team America’s first shot was a Metta three and a Metta miss.

– Despite spending a season in China, McGrady feigned ignorance to the existence of Wang Zhelin, one of the brightest young Chinese prospects and possible draft pick next year. Wang had a pretty dominant start to the game for Team China. Wang, 19 (supposedly), is a talented, mobile 7-footer, and was definitely the center-piece for China’s team. We hope T-Mac knows him now.

– Joakim Noah doesn’t have an off switch, and he decides to play playoff defense from the get-go. He is aggressive and emotional on the other end, too, dunking emphatically, taking ill-advised long twos, and on one occasion, playing the role of a point guard while trying to beat his man off the dribble. Good times.

– Watching Yi play in this game (and for his CBA team Guangdong in the past), it’s clear that being in China raises his confidence to another level; he plays with the swagger of a superstar. He takes a far more aggressive role in the offense. It didn’t amount to much in this game, but at least he was trying.

– In two consecutive possessions in the second quarter, Metta attempts to inbound the ball from his own end with a heave pass to the running Chris Singleton all the way on the other end of the floor. Two turnovers.

– Luis Scola’s under-the-radar career went a little further under when he joined the Suns, but the big Argentinian definitely still has some of the prettiest back-to-the-basket post moves.

– Rubio checks in to the surprise and delight of the fans. He looked a little rusty throughout the game, but was aiming to please.

– Rubio and Metta on the same team is my dream come true.

– The crowd breaks into “Mai Di” chants (that’s McGrady’s Chinese name) on numerous occasions, urging him to play. But it’s to no avail.

– The game itself is a pretty even, low-scoring affair, with the American side not taking things too seriously yet (except for Noah) and the Chinese side looking quite rusty.

– After halftime, quite inexplicably, the two participating teams get replaced by two teams of Chinese primary school-kids (presumably from Yao’s foundation school) wearing the same jerseys as the actual teams that now sat on the bench. For the next 10 minutes, the kids play a full-court game on a lowered rim and with a smaller ball. This surprisingly turns out to be a more entertaining affair than the “big-boys” game, as the kids ran helter-skelter end to end and each basket was greeted by rousing applause. McGrady was promoted to Head Coach for the kids, and took this brief job as primary tactician very seriously, mock-arguing with the refs on the sidelines, stepping out on the court animatedly and shouting tactics to his young players during the timeouts. As a matter of fact, this was the most animated I had ever seen McGrady.

– I initially assume that the game is just an extended half-time show, but my Chinese friend clarifies that the kids have just played the third quarter of the game, and the accumulated scores will count when the real teams return for the fourth quarter.

– By the time the fourth quarter does begin, Team America and Team China hit the floor again with China leading 42-40. Team America stops messing around and perks up on the defensive end. Noah is a monster, commanding the post to shut down all comers. The result is two-fold: the “Americans” begin to get a lot of fast-break opportunities that lead to breathtaking dunks and the Chinese players then retaliate by shifting into higher gear, too. Suddenly, we have a game!

– Noah continues his dominance on both ends of the floor, blocking several shots and scoring on numerous occasions. He ultimately ends up being the difference as Team America pulls through for a 61-58 victory.

– Hugs, cheers and applause for Yao.

And, that wraps it up. Watching basketball in China is always an awesome, if surreal, experience, which includes ingenious chants from the fans, a conglomerate of different and sometimes random NBA jerseys (I saw a guy in a Celtics Larry Bird uni a few rows in front of me), inappropriate arena music, a lot of laughs from the crowd, awful, sweet popcorn (this one is a personal pet-peeve) and awkwardly gyrating cheerleaders.

Mix those ingredients with an invasion of random NBA players, and the end result was a pretty memorable night of basketball. Thanks for the fun times, Yao. 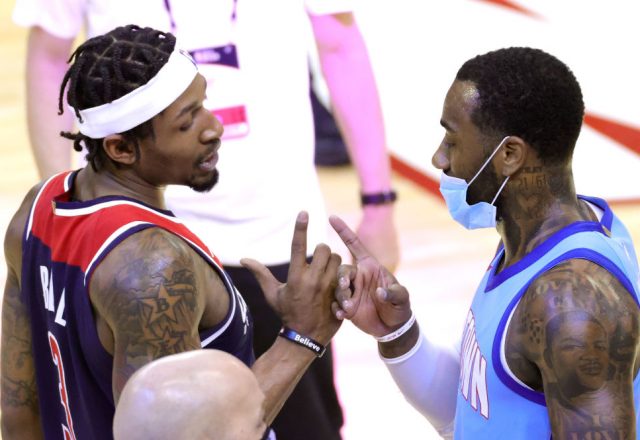