Yet Another Blazer Goes Under the Knife; Channing Frye’s Turn 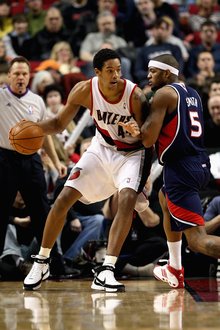 Members of the Portland Trailblazers organization seem to be taking turns going to the doctor’s office. First, it was Greg Oden getting microfracture knee surgery, followed by Brandon Roy’s arthroscopic knee surgery, and now backup forward Channing Frye is getting some cut-up, too.

Trail Blazers forward Channing Frye will be out of action until at least November after he had surgery on Monday to remove bone spurs from his left ankle.

The arthroscopic surgery was performed in Southern California, and the team said he is expected to miss 8-to-10 weeks. That would place his return early in November, when the season is one-to-two weeks old.

Someone should probably check exactly what is floating in the Portland water just to be safe.

In 78 ballgames last season, Frye put up nightly averages of 6.8 points and 4.5 boards.