A better take on the ongoing stat nerd war 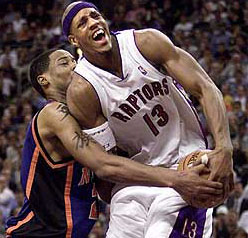 My friend Jon Weiler has an interesting, cerebral blog called Sports Media Review, in which he tackles a wide range of sports and sports coverage issues. He often writes about hoops and has an interesting, deep take on things. Most welcome to me, he is not snarky, a style of writing that’s getting a little old and overused in my book.

Here he wades into the stats geek fight between Hollinger and Malcom Gladwell’s boyfriend. Although I personally don’t have a lot of patience for all of this stuff which I think turns the game we love into boring, tedious math class, I like Jon’s take.

It bugged me enough when the stats geeks took over baseball, but in some ways they were a relief after years of bad poetry spilled over the game. But basketball just seems to me inherently ill suited to this sort of numbers crunching.

And we’ve had so much brain power spilled over this argument, which is patently absurd. How can you ultimately defend a system that crunches numbers then declares Junkyard dog Williams to be more valuable than Allen Iverson? It’s absurd for so many reasons but most importantly because it doesn’t take into account the makeup of the team. Someone like JYD is extremely useful as a teammate to someone like AI. Basketball is a team game and a players’ worth is virtually impossible to measure in a vacuum. You have to, you know, watch the games.