Z-BO and NYC. What could possibly go wrong? 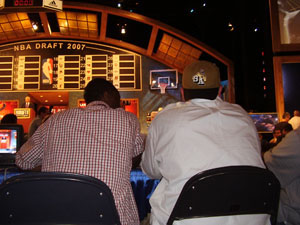 G’s up. Imus’s offensive insensitive word down. If the Knicks can’t swim, they gonna drown.

Love it. LOVE IT!!! In a basketball sense, sure it’s a little crazy to have two lost post scorers that don’t do anything on defense. One of them is rugged on offense (meaning Eddy Curry catching the ball and plowing over 8 people and not getting called for the offensive foul on his finest possessions) but he can’t rebound. The other is a finesse player with refined skills on the low block, but he’s good at understanding where the ball goes to get rebounds. It is not a perfect basketball solution, but hey it’s the Knicks and it should be fun.

Steve Francis and Channing Frye are nice people, but there are a lot of nice people out there that don’t need to be on an NBA basketball team. Channing had a few good months. Steve is the enigma of all enigmas. Later fellas.

Then there is the other side of Z-BO. When I wrote the feature on him for SLAM this past season, I spoke with him in the visitor’s locker room in Philly before and after a game. (Interesting factoid: when we were introduced his pants were half on, and as he reached out to shake my hand they fell down and he stood there naked like it was nothing. Locker rooms are a weird place.) My biggest regret of the past year is from that night. He asked me “What are you doing later?” and knowing his whole, you know “history” I froze up and just said going back to my hotel. I could have been running wild with Hoop Family! Trizzy!

Yesterday I had a man-to-man meeting with my boss of bosses at work. We talked about the past, present, and future, and it led me to thinking of one moment in the past when I had this Hip Hop radio show in college and I started talking about SLAM on the air. It was around the time when Karl Malone was about to win the MVP, and there was an issue of SLAM with Iverson on the cover calling him the real NBA MVP. I hope this story is accurate and that issue exists, cause my memory of those days is not 100% clear. Anyways, this was a time when a player having tattoos and a checkered past out in the open was still kind of shocking. I do not know where this train of thought is heading, but I will say that I am very excited for the people of NYC that have never heard of Z-BO and want to be front-runner Knicks fans. It’s not so much the basketball media and fans that are going to have fun with a guy with his kind of reputation coming to town, it’s the outrage that will come from the moral highground types. Looking forward to it. Can Z-Bo stay out of trouble in a city with this much temptation? Of course not! This is going to be fun.

Stephon Marbury has already weighed in as only he can, saying “It’s finally happening. God’s plan is working.” Seriously, he said that. No Stephon, you as a person that is quoted publicly is God’s plan working.

Okay, for the rest of last night’s events.

Ray Allen traded to Boston? Hey, him and Paul Pierce are sort of the same thing, with Paul being a better all-around player and Ray a better outside shooter, but it’s not like the Celtics needed any more young guys. They are in the Atlantic, and next year Ray-Pierce-Al Jefferson might be just as productive as Kidd-Carter and his $60 mill-Richard Jefferson. Toronto should be the favorite though, just because they seem to have some kind of plan/direction. The Sonics don’t need Ray anymore with a new franchise player in town, so why not? Did anyone have any idea that this trade was happening? The pre-draft rumor period is so worthless.

The Bobcats traded Brandon Wright for J-Rich, which seems on the surface to be Michael Jordan once again taking a risk on bringing veterans to a team for that WIN NOW atmosphere. Uh… The Bobcats have an interesting mix. Interesting. Can a team have J-Rich and Gerald Wallace at the same time? Is that allowed? G-Shock (contest winner name!) is out of there. The Warriors ditched an expendable part to get someone that could be a great fit for them and maybe even give them some defense if Nellie can motivate. If he wants to do it that way. Never try to predict what Nellie has up his sleeve, because you do not know.

I don’t have much to add about the being at the draft experience, since Lang did a live blog, Russ watched it on TV and wrote about it – staying through the whole second round (!), and we have another exclusive draft post coming later today. I didn’t even bring my laptop to the draft, but I had my camera for surveillance photos of some of the SLAM braintrust. Here is Khalid and Lang staring over at the player’s section to try and figure out who is about to be selected by the Atlanta Hawks. Really I just wanted to take photos inside of MSG, because I had an unfortunate run-in with George Kalinsky earlier in the evening. He is the official photographer of Madison Square Garden and he threw me an impatient forearm shiver. I will have my revenge Kalinsky.

The other funny part of the draft was when I would leave my seat and walk around with my media credential around my neck, people kept yelling at me “SLAM!” I felt it was my duty to pose like a rapper. When you’re in public you’ve always got to be ON.

Alright, FRI-DAY!!! I hope everyone sticks with us over the summer. Just because the season and draft are over doesn’t mean we stop. I now have a staff of many, and there will be lots of things and stuff for you all to enjoy.