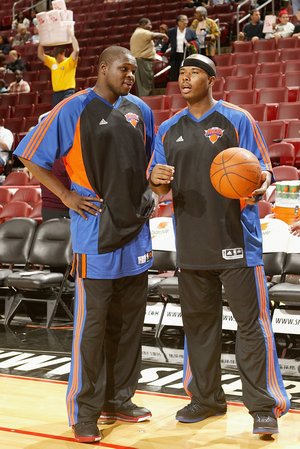 Breathe easy, Clippers fans. Zach Randolph will not be around to potentially ruin the Blake Griffin Experience. Instead, he’s off to Memphis, and coming back to Clipper-ville is the artist formerly known as Quentin Richardson.

The Grizzlies will happily take Z-Bo (and the $33 million guaranteed to him over the next two seasons) off the Clippers’ hands. Their fans, I can only imagine, must be filled with joy. The only people happier are those who cheer for the Clippers.

Zach, we hardly knew ye. Having become the all-time leading Los Angeles Clippers scorer in his 39 games with the team, Zach Randolph was packaged for delivery to Memphis on Wednesday when the teams agreed to a deal that will bring back former Clipper Quentin Richardson, and open a starting spot for rookie Blake Griffin…Randolph, a low-post scoring machine, averaged 20.9 points a game in his short stint here, eclipsing Elton Brand’s Los Angeles Clippers career mark of 20.3.

In a surprise, the Clippers didn’t do it to dump salary. Owner Donald T. Sterling actually resisted the move when a similar deal with Memphis came up on draft day, saying he wanted to do it only if it was a “basketball decision.” When his people said it was a basketball decision, the deal was resurrected. Nevertheless, with Randolph under contract for two more seasons at $33 million, and Richardson on the last year of his deal at $8.7 million, it will impact their bottom line, and, with their payroll now far below the salary cap after this season, can make them a major player in the big 2010 free-agent class.

Welcome to the starting lineup (and the expectations that come with it), Blake Griffin. We hope you enjoy your stay here.