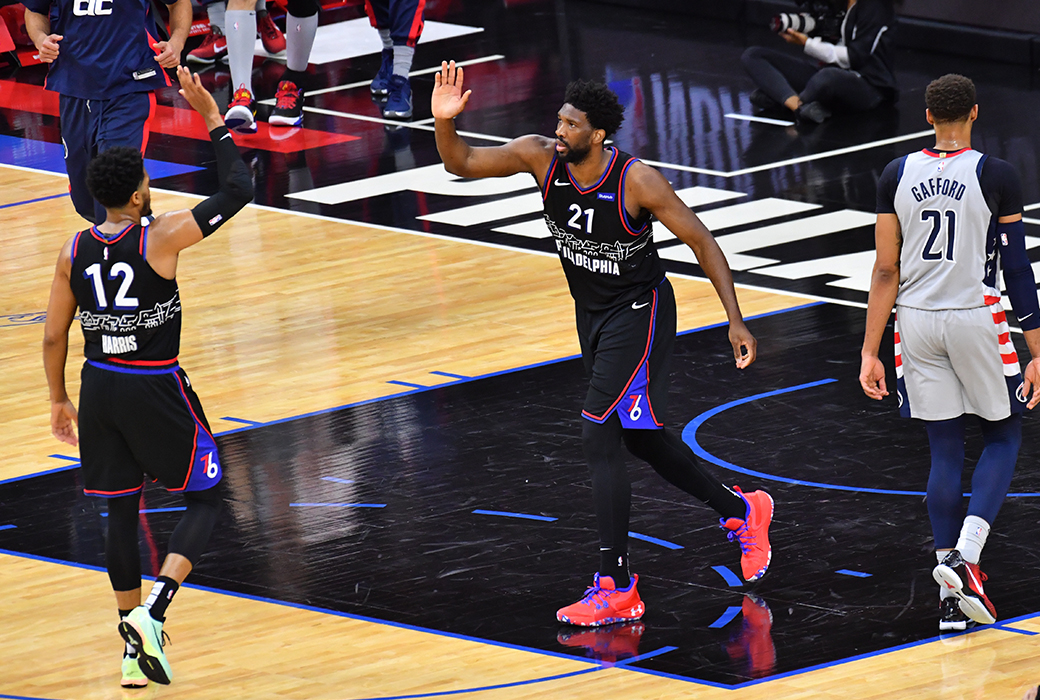 The evening started with the Washington Wizards looking to even the series against the Philadelphia 76ers and the New York Knicks attempting to do the same against the Atalanta Hawks. The evening game was another one vs. eight seed game, with the Utah Jazz taking on the Memphis Grizzlies.

The Wizards looked out of their depth Wednesday night, with the D.C. squad trailing by double-digits almost the entire game. Joel Embiid and Ben Simmons each finished with 22 points, and Tobias Harris added another 19 points.

Embiid getting wild after the and-one 😂 (via @NBATV) pic.twitter.com/j6Dgb8cBEa

No Wizards player finished with more than 11 points except Bradley Beal, who had a game-high 33 points.

While the Wizards being down 2-0 in the series is bad enough, the injury to Russell Westbrook could be cause for more concern. Westbrook left the game in the third quarter with an ankle injury, and if he’s unavailable for the next two games, that might be a wrap for the WIzards. An altercation between Westbrook and a fan stole headlines when Westbrook confronted a fan who dumped popcorn on him.

By the way WE AS THE PLAYERS wanna see who threw that popcorn on Russ while he was leaving the game tonight with a injury!! There’s cameras all over arenas so there’s no excuse! Cause if the 👟 was on the other 🦶🏾.🎥 #ProtectOurPlayers

The most exciting game of the evening belonged to the Eastern Conference’s four vs. five seed matchup. The Knicks struggled in the first half containing Trae Young and entered halftime down trailing 57-44. But the Knicks’ offense came alive in the second half, and the defense held the Hawks to under 20 points in both quarters, which eventually gave them the late third quarter.

It was a big night for Derrick Rose off the bench, scoring a team-high 26 points to go along with four rebounds and four assists. Four other Knicks also went double-digit in the scoring column, including Julius Randle, R.J. Barrett, Reggie Bullock and Alec Burks.

Offense was easy to come by in the final game of Wednesday night, with a reinvigorated Jazz team dropping 141 points to defeat Memphis. Three players put up more than 20 points for Utah, including Donovan Mitchell (25), Mike Conley (20) and Rudy Gobert (21). Bojan Bogdanovic chipped in an additional 18 points, and Mr. Sixth Man of the Year, Jordan Clarkson, added 16.

Sensation Ja Morant kept the Grizzlies in the game nearly single-handily at points, finishing with 47 points, seven assists, and four rebounds. Dillon Brooks and Jonas Valanciunas both had solid scoring nights, finishing with 23 and 18 points, respectively. Bench scoring was an issue for the Grizzlies, as only 14 points came from their bench all night, and seven of them came from De’Anthony Melton alone.