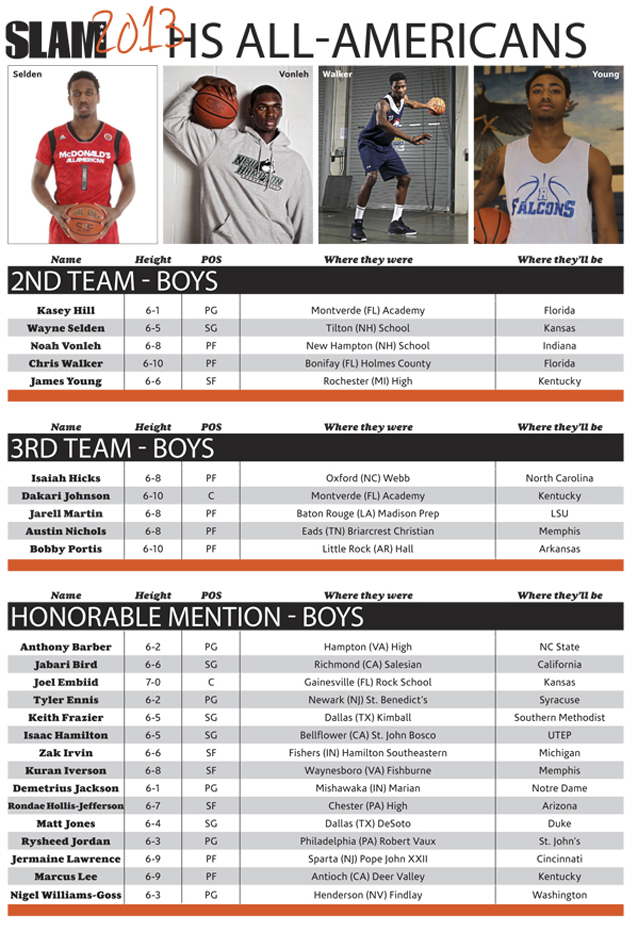 Our annual mid-April HS All-American photo shoot is always one of the more exciting shoots we get to do every year. But this one was special. See, the guys you see in the photo above and in the gallery below (scroll through it!) collectively have expectations that are way higher than those in any of the All-American classes we’ve had in recent memory. All are projected to be top 10 picks in next year’s NBA Draft. This has even been referred to as the best prep class since 2007—which featured the likes of Derrick Rose, OJ Mayo, Kevin Love, Blake Griffin and James Harden—and next year’s Draft class has already been projected by many to be the most talented since the 2003 LBJ/D-Wade/Melo-led group. Ultimately, the group shot above has the chance to be a classic one somewhere down the road.

These guys don’t need any introduction, since by now you’ve more than likely already heard their names or seen their highlight mixtapes. Jabari Parker and Andrew Wiggins have dealt with King James-type hype over the course of the last two seasons. Aaron Gordon’s off-the-charts athleticism has already anointed him as the second-coming of Blake Griffin. Meanwhile, the Harrison twins have garnered attention for their superior guard skills and many believe they are the next great guards coming up the pipeline. And then there’s Julius Randle, who has proven to embody college-ready (or possibly even pro-ready) physique for the last few years. And when you click over to the second page of this post, you’ll see that the second team, third team, and honorable mentions have the potential to be just as special. We can’t wait for these studs take the floor for their respective collegiate teams in the fall—congrats to all of them!

Also, shout out to the Jordan Brand for their help with the shoot, providing the sick kicks on display and all they do off-court, and also big ups to Shirts & Skins for the dope SLAM unis they put together once again!