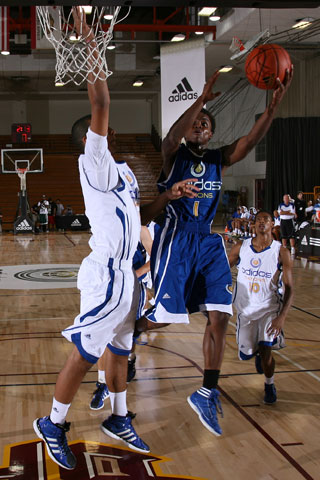 The championship game of the adidas Nations tournament featured a match-up between rising seniors and underclassmen, but Amile Jefferson wasn’t sleeping on the youngins. The talented wing from Friends Central High in Philly continued his string of solid performances at the tourney on Monday night, helping lead USA 2012 Blue to a 114-107 victory over USA 2013 Red.

“We played from behind in every game here, so I didn’t take them lightly,” says Jefferson, who dropped a game-high 24 points and added 12 rebounds. “I don’t think we were ahead at halftime in any of our games so I knew we were going to scrap it out at the end. In the second half we really got out in transition and stepped up our game.”

Monday night’s final, held at Cal State Dominguez Hills in Compton, was the fourth day of the event that featured 150 elite players from all over the world—players from Africa, Asia, Australia, Europe and Latin America attended. The US contingent fielded four total teams, two from the Class of 2012 and two from 2013.

In the final, the underclassmen played tough as they had throughout the event, led by Aaron and Andrew Harrison, a set of 6-5 twins from Richmond, TX. The pair combined for 34 points on 14-24 shooting, led by 20 points from Andrew. “The twins played really hard,” Jefferson says. “They are really strong guards.” Despite a solid contribution from Chris Walker—who chipped in 15 points and 7 rebounds—the underclassmen couldn’t overcome the size and experience from the rising seniors. USA 2012 Blue outrebounded the young bucks 44-26 and guards Rodney Purvis and Kris Dunn controlled tempo, dropping 8 assists each.

Bigs Cameron Ridley and Andre Drummond helped clog the paint for the seniors and each dropped 12 points. Drummond graduated from high school this spring and is academically qualified to play college basketball next season but many believe he will return to his prep school for a post-graduate year in order to be eligible for the NBA Draft next summer—the rules under the last NBA collective bargaining agreement allowed players to enter the Draft if they are at least one year removed from their graduating high school class. Drummond would fit the criteria if the rule remains in place when/if a new CBA is signed and the 6-11, 265-pounder is expected to be a top pick in the Draft whenever he decides to go pro—NBAdraft.net currently has him as the top pick in their 2012 mock draft. “I’m having fun with it,” Drummond says of the rumors. “People come up to me and say, ‘I hear you’re going to this school.’ Everybody is guessing because nobody knows what I’m doing. There is a lot of speculation there.”

Drummond clearly has an NBA frame and a nice skill-set at this point in his career. It will be interesting to hear his decision, which most people believe will come on August 10.

The consolation game at adidas Nations featured the two other US squads, also matching up a group from the Class of 2012 against 2013. This was a decent game for one half with USA 2012 red pulling away after halftime for a 130-108 rout of USA 2013 Blue. The underclassmen had no answer for Xavier Johnson and Gabe York, who dominated. Johnson goes hard on every play on both ends of the floor and was a favorite of his coach, Mike Dunleavy Sr. At one point, I heard Dunleavy raving about Johnson, explaining to a friend that his squad never lost a quarter that he played in during the entire tournament. He finished with 28 points on 9-15 shooting. York—a 6-3 guard who has committed to Arizona—was getting loose on run outs and drives to the bucket. He racked up 23 points, 5 rebounds and 4 assists in an attacking style that was very reminiscent of former Wildcat Jerryd Bayless.

Kevin “Yogi” Ferrell also put together an impressive performance for the rising seniors. The 5-11 PG was the fastest player on the court and displayed a nice cerebral feel for the game, finishing with 14 points and 8 assists. Ferrell has committed to Indiana, much to the delight of L.A. Clippers guard Eric Gordon who was posted up in the front row. “He plays more of a true point guard, he sets people up and is very explosive,” Gordon says. “He likes to move around and is very edgy. That’s what you want from your point guard.”

Gordon was on hand to show support to his shoe brand and a couple kids from his hood. He says Ferrell and forward Jeremy Hollowell of Lawrence Central High (Indianapolis) practically grew up nearby. “I’ve known both of them since they were young-young,” he explains. “I’ve been paying close attention to them and I’m happy they’re going to Indiana. They will be program changers for sure.”

* Steven Adams—a 7-footer from New Zealand—made the biggest impact among International players. He put up a few monster games: 12 points and 20 rebounds on Day 1 and a monster 37-point, 18-rebound performance on Saturday against USA 2013 Red. The 18-year-old has played the game seriously for five years and has committed to Pitt, but has yet to qualify academically. “I thought they were a good college and they were the first one to offer me,” Adams says. “Jaime Dixon had a sent a scout out to see me when I first started to get alright-ish.”

* SLAM diarist Shabazz Muhammad and Baylor signee Isaiah Austin sat out of the final due to injury.

* In addition to Gordon, NBA players Jrue Holiday, Josh Smith, Wesley Johnson and WNBA star Candace Parker were in attendance for the final.

* Special thanks to our friends at adidas for taking care of SLAM at a wonderful event. Big Up to Paul Jackiewicz of adidas PR for all of his efforts in helping us secure interviews and information.