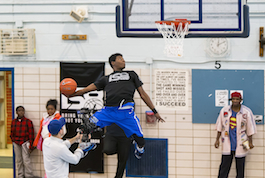 In a small and clustered gym in South Jamaica, Queens, where space is so scarce that fans in attendance aren’t even allowed to sit on the bottom first row of the bleachers because doing so would literary put their feet on court, lives a rich culture of grassroots basketball. The in-your-face setting provides a unique atmosphere that’s evident in the annual iS8 tournaments hosted there (the Spring Classic & the Fall Tip-Off) — instead of having participating players’ last names in the back of their respective jerseys, the tourney has always opted to place the “bring your game, not your name” slogan as a substitute.

Nonetheless, the names that have stepped on the hardwood in this tiny middle school gym over the years are nothing to sneeze at. From LeBron James to local stars Stephen Marbury, Lamar Odom and Lance Stephenson, it has historically been viewed as a “must attend and show out” for any rising prep player looking to prove his value (ranking, hype, etc.)

And with the fans right on top of the action and spectators surrounding the court on both baselines (there’s bleachers on only one side of the court since the other side barely has enough room to host the team benches and a scorer’s table, and thus fans standing on both baselines with barely enough room for players to even step out of bounds is a common occurrence), your name, ranking, and college commitment don’t mean much once you’ve set foot on that floor.

Yet, this past weekend, the iS8 experience was taken to a whole new level for the fortunate high schoolers that made it to the championship game – and for the fans as well – thanks to Nike stepping in and placing a temporary wrap on the worn out hardwood for the occasion, among other upgrades. As the photos above demonstrate, the Swoosh hooked up the gym with a freshly decorated floor that featured the iS8 tourney logo branded at half-court and a humongous action shot LeBron James (and his new kicks) that occupied the entire space inside the perimeter.

The players also walked in to decked-out locker rooms where a boxes of LeBron Soldiers awaited them beneath each uniform in their personalized lockers.

As for the game itself, it was 2GZ Entertainment and Montebello that squared off in the title game of the Fall Tip-Off Classic. Isaac Grant, a 6-5 junior forward at Archbishop Molloy (Queens, NY), began the game by showcasing his assertiveness in the paint while Jaheam Cornwall, a junior guard at Francis Lewis (Queens, NY), sunk a couple of three-pointers to give Monebello a 20-12 lead after the first quarter.

In the second quarter, 2GZ came out swinging with a 7-0 run thanks to Jaquan McKennon, a 5-11 point guard at Thomas Jefferson (Brooklyn, NY), converting from behind the arc and finishing strong at the rim, closing the lead to 20-19. Both teams were pretty much even for the remaining of the second quarter, but 2GZ was able to get ahead slightly, 31-29, at the half.

2GZ carried their momentum from the second quarter into the third, where they exploded for 27 points, including 12 from Shamorie Ponds, a 6-0 guard at Thomas Jefferson (Brooklyn, NY), who fully displayed his scoring prowess and craftiness as he connected from distance but also caught defenders by faking passes and getting creative at the rim with up-and-under finishes. 2GZ extended their lead to 58-45 over Montebello heading into the fourth.

In the final quarter, 2GZ expanded their lead to as much as 17, and while Montebello made a run in the last couple minutes to cut the lead down single digits, they eventually ran out of time and witnessed 2GZ come away with a 76-68 victory and the championship hardware.

Ponds earned the MVP honor after finishing with a game-high 24 points. Teammates Davere Creighton and Devon Dillard were also instrumental in the win, as each contributed 16 points. For Montebello, Grant, who earned the sportsmanship award, finished with 18 points, while Cornwall chipped in 14 in the losing effort.