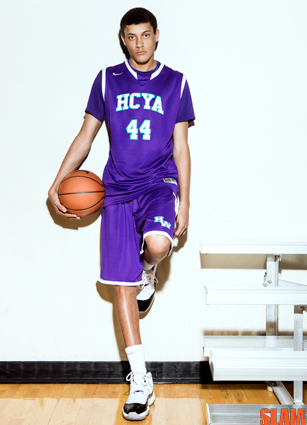 By now, Justin Jackson has heard all the questions and misconceptions, and he’s answered as many as he can. He appreciates the advantages and the disadvantages of being homeschooled, even as he insists there really aren’t many disadvantages at all. Mostly, he knows that he’s really no different from any other high school senior—assuming, of course, that that senior is one of the 10 best prep ballplayers in the nation.

Jackson is just now wrapping up his final season with Homeschool Christian Youth Association, and a look at the HCYA Warriors homepage will tell you the kind of success he and his fellow Houston-area homeschooled ballers have enjoyed. Scroll down and you’ll find photo after photo of the purple-clad Warriors holding up trophies from the Texas state playoffs and an array of invitational tournaments over the past few years. In every one of them, Justin is the tall, lanky dude smack in the middle of the back row, smiling above it all.

Not bad for a bunch of kids who only practice two days a week.

“I don’t think being homeschooled is any different than going to a public school or private school,” Jackson says. “I think the biggest thing is, people think we’re just home all day and can work out all day long. But honestly, I think I might work out less, because I have more schoolwork to do.”

The 6-8, 200-pound UNC commit is already arguably the best small forward in the 2014 class, and he’s (relatively speaking) barely practicing? It’s a scary thought for Jackson’s opponents and heartwarming news for UNC fans looking for the guy who might help the Heels reestablish their dominance. Imagine what this dude will be able to do when he’s working out as much as his peers. “That’s one thing I’m looking forward to,” he says. “Being able to get in the gym every day, work out every day. I think I still have a high ceiling. I want to see how much better I can get.”

Just don’t take Jackson’s excitement about college to imply any regrets about his path thus far. Homeschooled since fourth grade, he’s done pretty well by the road less travelled. His parents (both talented ballplayers in their own school days) feel they gave their son the best opportunity to be educated on their terms while still preparing for college, and through HCYA, he’s been able to face many of the best teams in the talent-rich Houston area—and beyond. Last December, he made his ESPN debut against top prospect Myles Turner and Dallas-based Trinity Christian, scoring 29 in a loss.

Point being, he hasn’t lacked for opportunities, and as he showed in the ESPN game, he tends to make the most of them. A versatile and efficient scorer, Jackson credits his success to his willingness to do “pretty much anything to help the team win.” Lateral quickness and improving on D are priorities, as is adding muscle to his slender frame—although, given how his body type and his game hint at those of Kevin Durant, he’s focused more on mind over matter. “I like watching the things he does to outsmart guys,” Jackson says.

Before he has a chance to test himself against KD, college awaits. Jackson is excited for the chance to dedicate himself in practice, to bulk up with the help of a college conditioning program and, just maybe, to dream about one day adding his name to those legendary jerseys hanging from the rafters in Chapel Hill.