Chris Paul dropped 33 in a battle with Russell Westbrook, Aaron Brooks hit 31, and more on Wednesday. 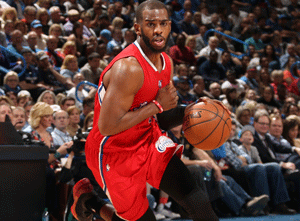 The Charlotte Hornets and the Sacramento Kings played a close game yesterday night when the latter visited the Time Warner Cable Arena. Buzz City was happy to have star Kemba Walker back after they lost him to an injury for 18 games. Things were all tied up at 75 when heading into the final period. That’s when the Kings’ star—DeMarcus Cousins—and high-flying teammate Rudy Gay scored a combined 23 points of Sac’s total 35 points in the quarter. Cousins finished with 20 points and 14 boards (his 39th double-double this year), Gay with 26, and Ben McLemore led all scorers with 27.

Michael Kidd-Gilchrist led the Hornets with 23 points and 9 boards, and Gerald Henderson added the 17-point, 11-assist double-double. He got credited for these two points on this beautiful sequence:

After being all tied up at the half, the Bulls came out in the third quarter and outscored the hometown 76ers by 9 points. Mike Dunleavy ended the third with this successful heave:

Heading into the fourth, the score was 72-63. With 9:44 left in the game, Philly was trailing by their largest deficit of the night—14 points. That’s when they went on a 15-0 run to take an 80-79 lead with 6:12 remaining. Aaron Brooks (31 points) then scored 6 points for Chicago in about a minute of game time, and both teams went back and forth scoring buckets. With 43 seconds left and the Bulls down 3, Brooks drilled a shot from the arc to tie it up. The game went to overtime, and Pau Gasol (27 points, 16 rebounds) and the Bulls finished off the home team for good.

Ish Smith led the 76ers with 23 points, Isaiah Canaan added 20, and Nerlens Noel grabbed 15 boards, 4 steals, and below is one of his two blocked shots:

Five Boston Celtics finished in double-figs last night to win the game against the tough Memphis Grizzlies at the TD Garden. Avery Bradley led the squad with 17, and Jae Crowder added 16 off the bench. The win didn’t come easily though.
The game stayed close throughout the night. Down 2 with less than a minute remaining, Evan Turner and Marcus Smart connected to tie the game with this difficult shot…plus the foul:

Jeff Green then completed a layup on the other end to bring the Grizz back within 1, but Avery Bradley was successful on a J with 7.9 seconds remaining. Memphis went to Mike Conley (who rolled his ankle in the third, but returned in the fourth) to shoot the 3 to tie, but he missed. He finished with a game-high 20 points in the loss.

The Miami Heat wasted no time getting things rolling in last night’s game versus the Brooklyn Nets. They tallied 34 points in the first quarter to take an 11-point lead with Goran Dragic (17 points) back in the lineup. Miami led by as many as 18 in the first half, with Chris Andersen (career-high 18 points, 14 rebounds) and Dwyane Wade (28 points, 9 assists) heating up. D-Wade even received some special chants from the crowd:

The loss was Brooklyn’s fifth in a row, despite five Nets in double-figs and another double-double from Brook Lopez (15 points, 14 boards).

Khris Middleton tied his career-high of 30 points last night after he set it just this past weekend. All five starters for Milwaukee scored in double-figs as they held off the Orlando Magic to improve their record to 34-30, good for 6th in the East. The loss was Orlando’s ninth straight on the road, despite a strong 19-point, 14-rebound performance from Nikola Vucevic. He helped give the Magic a 10-point lead in the third quarter, but Milwaukee then went on a 12-2 run. In the final period, the Bucks outscored the Magic 25-19 and got the home W.

Chris Paul shined bright over the Thunder last night in Oklahoma City with a game-high 33 points to go along with his 9 assists to get his Clips a win.

JJ Redick added 25, and DeAndre Jordan contributed 18 points and 17 rebounds. The Clippers led by as many as 22 points on the night, while Russell Westbrook—although finishing with 24 points and 9 boards—turned the ball over 10 times. This is pretty amazing, still:

Anthony Morrow led the Thunder in scoring with 26 points off the bench in the loss, and Mitch McGary led in bench celebrations:

So this one was kind of weird…the Denver Nuggets led by as many as 34 points last night when the Eastern Conference leaders, Atlanta Hawks, came to town. Denver was up 18 at the half, and not much changed in the third as the Nuggets outscored the Hawks 38-26.

In the fourth, Atlanta gave the Nuggets a late scare when they went on a 24-1 run. They cut Denver’s lead to 9, but with just 45.4 seconds left on the clock, the Hawks were too late to change the game’s outcome.

Seven Nuggets finished in double-figures in the win, led by Danilo Gallinari (23 points).

Markieff Morris led his Suns to a win at home last night when the Minnesota Timberwolves came to town. He scored a game-high 24 points, two of which came off this feed from his twin bro:

Rookie TJ Warren added a career-high 17 off the bench for the Suns, who led for most of the game. The Timberwolves, led by Kevin Martin’s 16 points, weren’t too far behind, but they were unable to finish the road win.

The Golden State Warriors played host to the Detroit Pistons last night in the Oracle Arena, where they’ve lost only two games. They weren’t about to add another loss in that column. Instead they won their fifth straight game. Klay Thompson led all scorers with 27 points, 10 of which came in the fourth quarter to hit the 5,000-point milestone.

Fellow Splash Brother Stephen Curry had a rare single-digit game last night, scoring 9 points. But he did have 11 assists, including this pass in the third:

Andre Drummond finished with 22 points and 27 boards for the Pistons, and Greg Monroe added 20 in Detroit’s eighth straight loss.

It was a close game throughout the night between the Portland Trail Blazers and the Houston Rockets yesterday in the Moda Center. It wasn’t until the fourth quarter that the home team led by 11 off an Arron Afflalo 3-pointer with 2:43 left in the game. And even still, the game wasn’t quite finished. Corey Brewer (23 points) was on some kind of roll…he scored the Rockets’ final 17 points in the game in under four minutes. He brought his team within a single point with this play:

But after that, the Blazers knocked down their free throws, and the Rockets missed their last chances at the win.