Devin Booker goes off for 46 points in Philly, Stephen Curry goes down with an ankle injury and more! 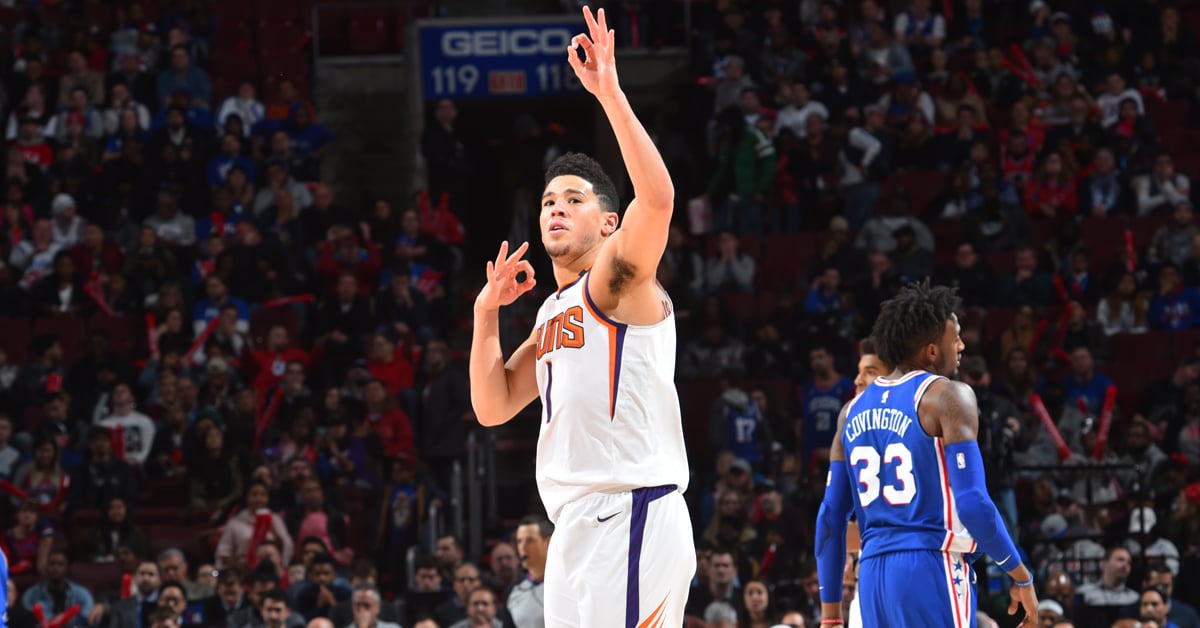 Charlotte had just a 1-point lead with 9:50 remaining when the team went on a 9-0 run. Orlando was never able to recover.

After missing two games with a bruised left shoulder, Kemba Walker paced the Hornets with 29 points (7-16 FG) and 7 dimes.

New York was reeling without Kristaps Porzingis, Tim Hardaway Jr and Enes Kanter. Courtney Lee was under the weather, and the Knicks couldn’t get anything go.

The game was essentially over mid-way through the second quarter, and Indy’s lead ballooned to 38 points by the third.

Phoenix may be headed for the lottery once again, but D-Book is worth the price of admission.

Despite committing 24 TOs, the Nets came away with a blowout win on the road.

Brooklyn opened up a 29-point lead in the fourth as they cruised to their third victory in their last five games.

Rondae Hollis-Jefferson had 16 and 10 to lead the Nets.

Despite a 40-piece by Giannis, the Celtics were control the game essentially from start to finish.

Jayson Tatum began the game a scorching 4-4 from three, and Al Horford continued his point-center ways with 20 points, 9 boards and 8 dimes.

He’s 4-4 from three vs the Bucks (via @celtics) pic.twitter.com/W3JKHhJvHR

Leading Sixth Man of the Year candidate Dwyane Wade returned to the desolation that is his former team to lead Cleveland to an easy W.

The Cavs’ 12th straight W is the longest winning streak in the League, while Chicago’s nine straight losses are the longest active streak as well.

Speaking of losing streaks, Memphis finally snapped their 11-game run of futility with a narrow W against the Wolves.

Tyreke Evans continued his reclamation season with 16 points and 9 assists in the victory.

The dub was dampened by a scary-looking ankle injury to Stephen Curry (31, 11 dimes, 5 boards) in the game’s final minutes. Thankfully, X-rays were negative.

👀 Steph heads to the locker room for X-rays on his ankle (via @anthonyVslater) pic.twitter.com/B1CJFqW1ek

Don’t look now, but the Mavs have won five of their last eight. They don’t have the talent to make the playoffs, even when Seth Curry returns. But it’s clear the tank has not yet been engaged.

Harrison Barnes had 22 points and 10 boards to lead Dallas.

A week ago, it was “time to take Andre Drummond and the Pistons seriously.” Now, not so much.

The Pistons dropped their third in a row despite leading for most of the game.

In case you didn’t read the score correctly, Washington didn’t even put up 70 points in an NBA game.

They were outscored by 34 in the first half, and Utah’s lead only continued to grow.