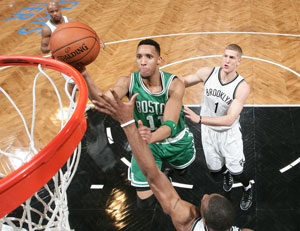 James Harden, tho. In his and the Rockets’ visit to Indiana last night, the MVP candidate went off for 44 points (19 in the fourth quarter). It was his eighth 40+ point game this season.

Josh Smith added 18 off the bench, and Donatas Motiejunas contributed 17. Houston headed into the locker room up 53-39 at the half. They led by as many as 21 points during the game, and the Pacers never caught up. CJ Watson was the high-scorer for the home team, with 23 points off the bench. Roy Hibbert added 18 points and 10 rebounds, and Solomon Hill did this:

In the Atlantic Division match-up last night, Evan Turner and the Boston Celtics would come out on top in Brooklyn. The Cs had a 5-point lead at the half, and they extended that lead in the second half. Turner finished with a 19-point, 12-assist, 10-rebound triple-double for the men on the road.

Five addition Celtics contributed double-figures in the win, which was more than enough to put away the Nets, despite Brook Lopez’s game-high 31 points and Deron Williams’ fancy crossovers.

With their win over the New York Knicks last night at Madison Square Garden, the Memphis Grizzlies officially secured their Playoffs spot. After trailing by 10 at the end of the first quarter, the Knicks managed to cut the deficit to 2 by halftime and even take the lead at the start of the third. But the tables quickly turned as the Grizz held the home team to just 13 points in the third, outscoring them by 11 for a 13-point advantage heading into the fourth. Zach Randolph led all players with 23 points, 7 boards, and 5 assists. Marc Gasol added 21 points and 8 boards in the win. Langston Galloway led the Knicks with 19 points and 7 rebounds in the loss.

The Chicago Bulls also clinched a Playoffs spot last night when they played host to the Charlotte Hornets. Rookie Nikola Mirotic led his team with 28 points, with 14 in the fourth to get the Bulls a win. It was a 4-point game with just under four minutes to play in the game when Mirotic hit a 3-pointer, a slam (see it below), and a layup plus the foul.

At the end of his single-handed 8-0 run, there was 1:18 left on the clock and the Bulls had a 12-point advantage. They never looked back.

The close game between the Timberwolves and Jazz in Utah last night went to overtime, thanks to a couple 3-balls from Zach LaVine in the final 25 seconds of regulation. This was the latter to tie the game at 96:

LaVine finished with a game-high 27 points to lift his T-Wolves over the Jazz on the road. He’s not just a dunk champ, people. Every other Minnesota player who saw minutes contributed double-figs except one (Adreian Payne…the guy had 8 points and 9 boards though, so you know). The Wolves pulled away in OT for the win, despite double-doubles from Rudy Gobert (18 points and 17 rebounds) and Derrick Favors (19 points and 12 rebounds).

Things were looking good in the first two quarters of last night’s match-up between the Wizards and Warriors at the Oracle Arena. Only 3 points separated the two competitors at halftime. But um…the #3rdQofDoom was a real thing for Washington. The Warriors held their guests to a mere 8 points in the third quarter as they exploded for 29. That was game. Stephen Curry finished with a game-high 24 points and 6 assists.