The Hawks won their 13th straight, and the Knicks ended their losing streak on Monday. 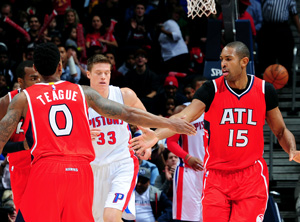 The Charlotte Hornets’ level of play is on a nice little uptick. Their win against the visiting Minnesota Timberwolves yesterday was their seventh in eight games. Al Jefferson returned to the Charlotte lineup and helped his Hornets hold the T-Wolves to just 36 percent shooting on the night. The home team was up by as many as 33 points. Despite a game-high 18-point effort from Thaddeus Young, Buzz City claimed the win.

Another game, another blowout. The Washington Wizards decided the result of this game early on. After the first quarter, the Wiz were up 27-14 against the visiting Philadelphia 76ers. Marcin Gortat led the charge with 20 points and 8 rebounds. John Wall was right there to back him up with 11 points and 10 assists. See ‘em both in this play:

Five additional Wiz posted double-figs to contribute as the team shot a spectacular 55.6 percent that earned them a 35-point lead during the game. The win broke a Wizards’ franchise-record in point differential.

It was a slow start for two of the hotter teams in the Eastern Conference yesterday. The Detroit Pistons came into Philips Arena having won their last seven road games. The Hawks were on a 12 game winning streak. At the end of the first quarter, the score was 16-12 in favor of ATL. Although it was a little lead, it was greater than any lead the Pistons could put together despite strong double-doubles from both Greg Monroe (16 points and 20 rebounds) and Andre Drummond (13 points and 18 rebounds). Detroit dominated 20-5 on the offensive glass, thanks to Monroe and Drummond, but the Hawks’ defense held the Pistons to 35.4 percent shooting. A 17-4 fourth quarter run sealed the win for Atlanta and extended their streak to 13. #ATLshawty is still going strong.

And! Check out this cool tribute for Dr. Martin Luther King at Philips Arena yesterday during the game:

Amazing MLK tribute on the court at the @ATLHawks game. pic.twitter.com/FiELbfcj4W

Although the Los Angeles Clippers started yesterday’s game versus the Boston Celtics 11-2 and built up a 23-point lead, the visiting team gave the home team a scare. Brandon Bass (17 points) and the C’s pushed in the third and fourth quarters to cut the Clips’ advantage to just three points. But Blake Griffin (22 points, 9 boards, 6 assists), DeAndre Jordan (19 points, 12 boards, 6 blocks), and the rest of Los Angeles’ squad completed the W in the Staples Center. Coach Doc’s son Austin Rivers scored his first two points as a Clipper yesterday:

Seems blowouts were quite the trend on Monday. The Golden State Warriors beat the Denver Nuggets by 43 points yesterday in Oakland. Forty-three. That’s the most points they won by this season so far. With the victory, Golden State matched their home winning streak at 16.

Every single player who saw minutes yesterday scored points, but the Warriors did it better. The Splash Bros. combined for 42 points on 26 attempts, and the reserves scored 67. They outrebounded the Nuggets 53-39 and held them to 34.5 percent shooting from the field. Add another dub for the Dubs, and let’s call it a night.

After playing a close game throughout, the Dallas Mavericks found themselves trailing by three points in the final four minutes of the game in Memphis yesterday. Naturally then, the Mavs decided to go on a 14-4 run to finish up. Dirk Nowitzki scored the the final 8 points for the Mavs to finish with 21. Monta Ellis added 25 points and 7 assists, and Tyson Chandler put up 10 points and grabbed 16 boards in the road win. For the Grizzlies, Mike Conley had a team-high 22, including a 3-pointer that put Memphis up by 3 before the Mavs went on their run in the final four minutes. Zach Randolph added 18 points and 15 rebounds, but it wasn’t enough to hold off Dirk and the Mavs.

So like, James Harden is really good at scoring. He leads the League in the category, and clearly made a strong argument for MVP in yesterday afternoon’s Rockets’ home game versus the Indiana Pacers. He scored 45 points on 12-18 shooting from the field while also dishing out 7 assists.

Harden dropped 18 points in the third quarter, and Houston was up 89-68 heading into the fourth. CJ Miles (23 points) and the Pacers made a final push in the final period, outscoring the Rockets by 11, but their last minute effort wasn’t enough to overcome the home team.

Are you ready for this? I don’t think you’re ready for this. The! Knicks!! Actually!!! Won!!!! New York’s 16-game losing streak was finally put to rest yesterday in Madison Square Garden. Carmelo Anthony led all players in scoring with 24 (12 came in the first quarter), and Langston Galloway added a career-high 21 (including 11 in the second quarter) in his first ever start.

Even having built a 15-point lead, the Knicks allowed Tyreke Evans (23 points, 9 rebounds) and the Pelicans cut it to a single point in the final minutes of the game. They managed to hold on to get their sixth win of the season, and Knicks fans all around finally rejoiced.

Cleveland’s starters put on a show as the Cavaliers took care of the visiting Chicago Bulls in the Q yesterday. LeBron James led all scorers with 26.

Derrick Rose had 18 on 5-14 shooting, and Jimmy Butler had 20 on 6-16. The Bulls simply weren’t feeling it as they played their third game without Joakim Noah due to a sprained ankle.

Six of the nine Raptors who saw minutes in their visit to Milwaukee yesterday scored double-figs. Kyle Lowry led the pack with 18 points, and Jonas Valanciunas added 11 points and 13 boards in Toronto’s road win. After trailing for the entirety of the second half, the Bucks took their first lead since midway through the second quarter with about six minutes of clock left in the game. The two teams exchanged baskets in the final minutes, but Terrence Ross (16 points) and the Raps held on, despite Brandon Knight’s 20 points and a solid night from Ersan Ilyasova (14 points and 7 boards) in his second game back from injury.

The Portland Trail Blazers turned it on in the fourth last night. They outscored the visiting Sacramento Kings 31-19 in the final period to secure a win in a game in which they were trailing by 13. Damian Lillard led the Blazers with 22, and Wesley Matthews added 16. In the second quarter, LaMarcus Aldridge headed to the locker room after hurting his hand in the first, and he would not return. DeMarcus Cousins (22 points and 19 rebounds) checked out early as well with 6 fouls. In the final 34 seconds of the game, Lillard scored 4 points, including this play below, to put away the Kings for good.

The Phoenix Suns scored 36 points on 65 percent shooting in the third quarter to take a 10-point lead heading into the final period. Goran Dragic and Isaiah Thomas scored 24 points each, and Eric Bledsoe added 17 as the Suns swept the Lakers in this regular season. Los Angeles again played without Kobe Bryant yesterday. Although Nick Young scored 24, the Lakers dropped their fifth straight game.