James Harden dropped a career-best 50 points to lead the Rockets to victory on Thursday. 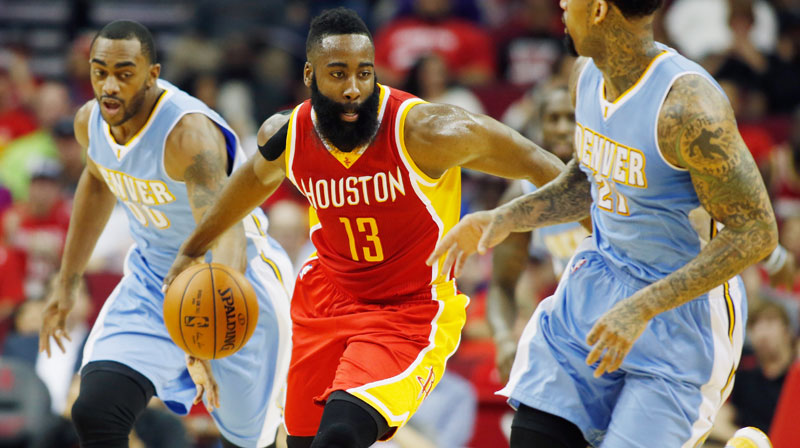 The league’s two worst teams — record-wise, at least — squared off Thursday night in New York, and the road team came out victorious in overtime. In doing so, Minnesota snapped a six-game losing streak and handed New York sole possession of the NBA’s worst record.

Andrew Wiggins and Zach LaVine each posted 20 points and 7 rebounds. Six of LaVine’s points came in overtime, and the dunk champ also hit the go-ahead free throw with 10 seconds left in the extra period. Kevin Martin added 22 points, and Gorgui Dieng filled up the box score with 19 points, 11 rebounds and 6 blocks. The Knicks were coming off a surprising OT win against San Antonio, but they couldn’t make it two in a row. Langston Galloway (21 points, 7 rebounds) and Alexey Shved (20 points, 6 assists) were bright spots.

The Dieng-Wiggins-LaVine machine was in full effect:

James Harden scored a career-high 50 points, and the Rockets beat the Nuggets to earn their 46th win of the season. The NBA’s second-leading scorer shot 12-27 from the field and 22-25 from the free throw line. Harden also pulled down 10 rebounds. Quite a bit of work in 40 minutes of playing time.

Houston led by 17 after three quarters but allowed Denver to creep back into it in the final period. Once Kevin McHale inserted his MVP candidate back into the lineup, the Rockets once again took control of the game. Trevor Ariza’s 17 points and 6 rebounds were a nice addition to Harden’s huge night. Randy Foye and Wilson Chandler each scored 23 in the loss, while Kenneth Faried went for 19 and 12.

Anthony Davis rolled an ankle during shootaround, so the Brow sat this one out. That would spell bad news for the Pels, though they did nearly pull this one off even without AD.

This game was not pretty. It lacked energy, and neither team could seem to find the bottom of the bucket. For Phoenix, Brandan Wright carried the load with 16 points to go along with 8 rebounds and a career-high 7 blocked shots. Markieff Morris dropped 17 points and pulled down 8 boards, while brother Marcus grabbed 13.

Tyreke Evans threw up a potential game-tying 10-footer with 2 seconds left that seemed to bounce around forever but eventually rimmed out. New Orleans is now a game behind Oklahoma City for the eighth spot in the West, and Phoenix is 2.5 games behind OKC.

The Jazz are 12-2 since the All-Star break. Seriously.

The Lakers outscored Utah 46-22 in the paint, and the Jazz only grabbed 2 offensive rebounds, but Gordon Hayward (22 points, 5 rebounds, 5 assists, 4 steals) and company still managed a win at the Staples Center.

Trey Burke added 17 points including three 3-balls off the bench to help deliver loss number 50 to the Lakers. Tarik Black posted 13 points and 10 rebounds, but no other player in purple and gold provided much of anything noteworthy stat-wise. Lottery-bound Los Angeles has now lost 25 of its last 30 outings.