James Harden recorded his second triple-double of the season on Monday. 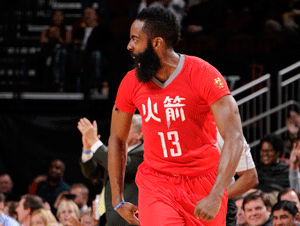 In his debut with the Miami Heat on Saturday, Goran Dragic scored 12 points in a loss to the New Orleans Pelicans. Last night, things were a little different. Dragic finished with a 23-point, 10-assist double-double, plus a couple of boards and steals. With him running the point, dishing out to Luol Deng, who finished with a game-high 29, the Heat got a home win over the Philadelphia 76ers. Three additional Heat players (the team shot 55.4 percent from the field) finished in double-figures last night, including Henry Walker in his debut. Two of his points came from this jam in the first quarter:

Hollis Thompson (22 points) was the leading scorer for Philly, who lost its fourth in a row.

Three Chicago Bulls finished in double-digits last night…in the rebounding category, that is. Pau Gasol (15 points, 10 rebounds) Joakim Noah (8 points, 16 rebounds), and Nikola Mirotic (20 points, 14 rebounds) and the rest of the Bulls’ squad brought down the boards to outrebound the Milwaukee Bucks 62-41 in last night’s game. Both teams shot poorly, right around 33 percent from the floor, but the Bulls took advantage with the boards. They had a 48-33 lead at halftime and continued to build on it in the third quarter, going up by as many as 22. Some fun dunks from the Bulls’ sixth win in seven games:

James Harden sure makes basketball look easy. In the Houston Rockets’ win last night against the Minnesota Timberwolves, Harden recorded his second triple-double of the season (31 points, 11 rebounds, 10 assists) even after starting the game 0-7 from the floor.

And if you wanted this particular play isolated from the rest of the highlights for like a tweet or whatever, here you go:

Five more Rockets scored in double-figures for the home win. Birthday boy Andrew Wiggins (30 points) helped bring the Wolves within a single point with 3:21 remaining in the game. It was all Houston after that though. From the 4:03 mark to 15.7 seconds at the end of the fourth quarter, the Wolves were field goal-less. Wiggs made a layup at the end, but by then Minnesota already suffered through a 16-4 run by Houston.

It was a comeback win for the shorthanded team from New Orleans yesterday. No Anthony Davis, Ryan Anderson, or Jrue Holiday and an 18-point deficit to recover from? Eh, no prob.

Six Pelicans finished in double-figures on 51.3 percent shooting. Omer Asik (14 points, 11 boards) and Tyreke Evans (13 points, 12 boards) recorded the double-doubles, and Jimmer Fredette led the team with 18. The Pels outscored the Raps by 10 in the final period for the win, despite strong games from T-Dot starters Kyle Lowry (22 points) and Jonas Valunciunas (17 points, 14 rebounds).

Brooklyn wins in blowout fashion on the road—not a line we read every day, but last night in Denver the statement rang true. Seven Net players finished in double-figs, including Brook Lopez (19 points, 9 rebounds) and Deron Williams (16 points, 12 assists). Markel Brown, Brooklyn’s rookie guard, played well in his first start—earning a 10-point, 12-board double-double. The Nets held the Nuggets to just 33 percent shooting in the game and a mere 13 points in the final period. Brooklyn led by as many as 30 points in the Pepsi Center yesterday evening, and the hometown Nuggets were not able to recover.

After being traded from the Suns to the Celtics just last week, Isaiah Thomas already made his return to Phoenix. Finishing with 21 points and 7 assists off the bench, plus a road win, he looked pretty good out there in green. Four more Celtics contributed double-figs for the winning team, including Avery Bradley who led the charge with 23 points.

At halftime, Boston was up by 17, and by the start of the fourth, the Suns cut the gap to 10. With under two minutes remaining in the game and Boston up by a single point, Isaiah Thomas hit a 3-pointer plus a free-throw, followed by a driving layup and two more free-throws to seal the win at 115-110. Get home safe now, IT.

The Jazz forced 22 turnovers from the Spurs and beat the veteran team in the paint 46-38. Tim Duncan led San Antonio with 14 points and 10 rebounds, but the defending champs haven’t yet returned to their winning ways since All-Star Break.

No lead extended beyond 8 last night in the close game between two Playoffs-bound Western conference teams. The Memphis Grizzlies flew into the Staples Center to take on the hometown Los Angeles Clippers, and they subsequently left with a win. Mike Conley led his Grizz with 18 points and 7 assists, and Jeff Green added 16 points and 6 rebounds.

With just under two and a half minutes left in the game, Memphis was up 88-80 off a Courtney Lee 3-pointer. Then Chris Paul (30 points, 10 assists) and the Clips went on a 7-0 run. Down 1 with 1.9 seconds left on the clock, Paul lost the handle, and Conley scooped the steal and drew the foul on the other end. He hit both shots, and the 90-87 score was written in the books.