Charlotte upset the Raptors and the Knicks dropped their 14th straight on Thursday. 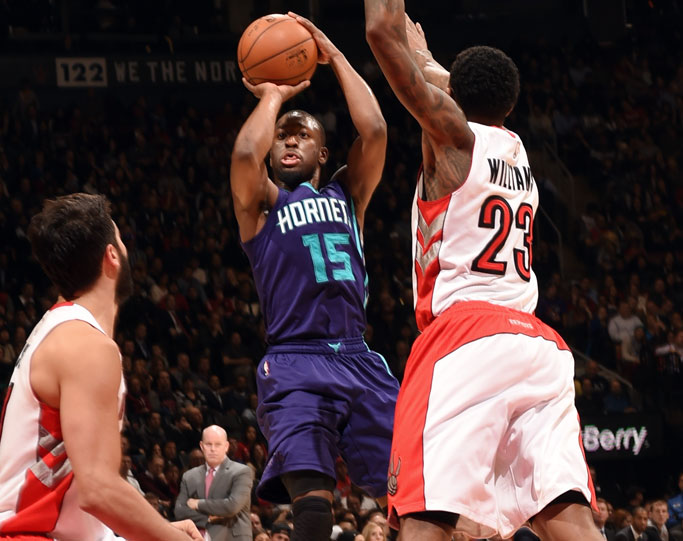 The first game of Thursday night’s TNT double-header went pretty much as expected.

Houston clobbered the undermanned and overmatched Knicks, who have now lost 14 straight games and 24 of 25. James Harden lit up MSG for 25 points, 9 assists and 3 steals in only three quarters of work. Dwight Howard found little resistance in the paint en route to 13 points, 10 rebounds and 2 steals. Donatas Motiejunas posted a statline of 17 points, 7 rebounds and 4 steals. Seven Rockets, including all five starters, finished in double figures. Meanwhile, not one player in New York’s starting lineup attained 10 or more points. Remember: the Knicks are missing Carmelo Anthony, Andrea Bargnani and Amar’e Stoudemire. They just traded away JR Smith and Iman Shumpert. As a result, NYK relied on Travis Wear (9-16 shooting, 21 points, 5 rebounds) and Langston Galloway (19 points, 4 rebounds) to lead the way offensively against a Houston squad that boasts a legitimate MVP candidate in Harden.

Twenty-four hours after hitting a game-winner to sink the Pelicans, Kemba Walker was once again wreaking havoc during crunch time. It’s now common knowledge that the fourth-year PG absolutely loves the rock in late-game situations, and last night was no different as he torched the Raptors with 7 points in the final two minutes of regulation. Kemba finished with 29 points overall alongside 8 assists, 7 rebounds and 3 steals to lead Charlotte to its fourth straight win. While Walker gets most of the shine with a near triple double, Gerald Henderson’s 31 points on 13-20 shooting cannot go overlooked. Michael Kidd-Gilchrist also chipped in with 10 points and 12 rebounds.

While Kyle Lowry is still the better player and Toronto the better team, Kemba and the Hornets got the best of ’em on the road. Lowry’s 24/7/7 and Lou Williams’ 15/5 were solid contributions, but, unfortunately, those numbers don’t have anything to do with the defensive end of the floor, where they struggled to guard Walker and Henderson all night long.

The Heat led 48-43 at the half but Portland exploded in the third quarter thanks to the play of LaMarcus Aldridge (24 points, 12 rebounds). The Blazers led by nine heading into the fourth, a period which the home team also dominated. Wesley Matthews scored 18 points including 3-5 from beyond the arc and Damian Lillard dropped 16 points and blocked 2 shots while rocking the headband look for the first time since his rookie year. Dwyane Wade (23 points, 7 rebounds) and Chris Bosh (18 points, 5 rebounds, 5 assists) got absolutely no help from their teammates in the losing affair.