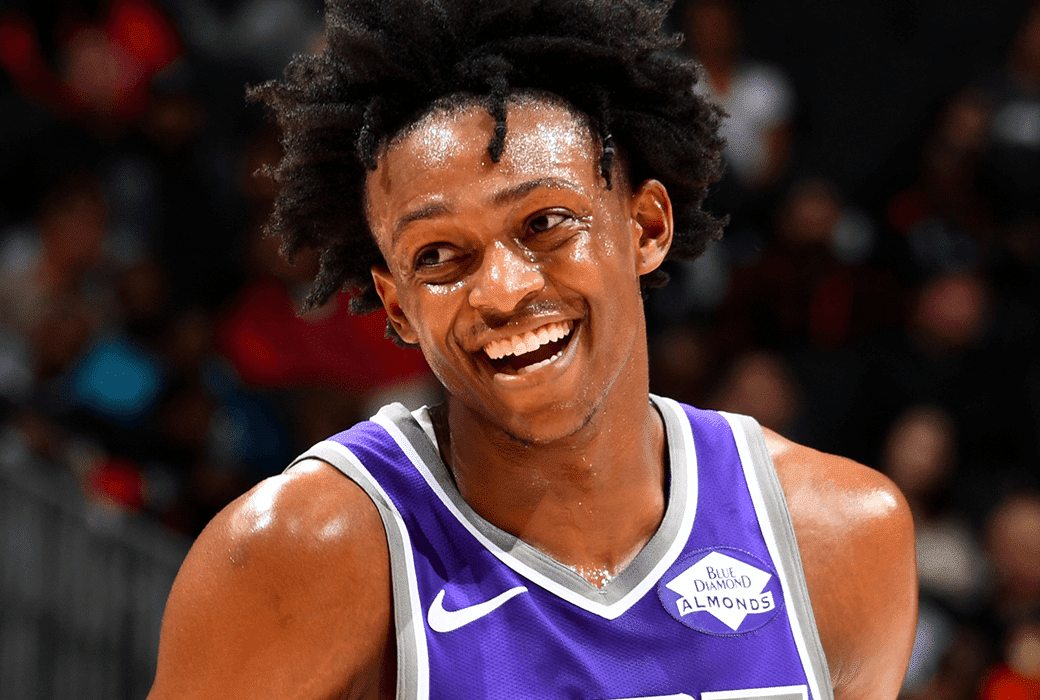 It’s a small sample size, but if the Kings’ last five games are any indication of what’s to come, a new era may be underway in Sacramento. The Kings have won every game since a 1-3 start to the year and sit at fourth in the League in points per game after dropping 146 in Atlanta.

20-year-old De’Aaron Fox became the youngest player in NBA history to record at least 30 points, 15 assists and 10 rebounds in a game as he led Sacramento to a blowout win that included a 46-point third quarter. Fox only needed 34 minutes and 13 field goal attempts to fill out his stat line.

Buddy Hield scored 27 and Marvin Bagley III added 18 points off the pine to assist in the blowout victory.

Trae Young racked up 14 points and 10 dimes while Jeremy Lin scored a team-high 23 points for the Hawks in the losing effort.

De’Aaron Fox is a star in the making, don’t get it twisted. 🦊 (via @SacramentoKings) pic.twitter.com/r43U5Cc7Js

Trae Young was born the year Vince Carter was drafted and now they’re connecting for buckets. 2018 is wild. (via @ATLHawks) pic.twitter.com/o5e0iwusiG

This year is different. 👑

The Kings just dropped 146 as they won their fifth straight to improve to 6-3. pic.twitter.com/UytWD8aFyB

The 76ers came out rolling on all cylinders as they scored 72 first half points and rain out to a 13-point lead at the intermission. Joel Embiid’s 24 first half points led the charge, but just 18 third quarter points as a team allowed the Clippers to stay in the game as the lead shrunk to just four entering the fourth quarter.

Philadelphia gained its mojo back in the fourth quarter as it bounced back from a rough loss to Toronto to get back in the win column.

Embiid finished the night with 41 points, 13 rebounds and four blocks and Markelle Fultz posted a team-best plus-minus of +16 as he racked up 12 points, nine rebounds and five assists in 21 minutes as a starter.

Boban Marjanovic had 15 points, 11 rebounds and three blocks in 23 minutes off the bench for Los Angeles.

Great players show up when it matters most, and Russell Westbrook didn’t shy away from the moment as he led the Thunder to a 19-point comeback win in Buzz City.

Westbrook finished up 29 points, eight rebounds, 10 assists  and three steals after dropping a crucial dime to Dennis Schroder and scoring twice in the final 1:12 of regulation.

Alex Abrines’ 25 points and 5-for-10 3-point shooting off the the bench were both career bests marks and came at a crucial time — the rest of the Thunder combined to shoot just 3-for-27 from behind the arc.

Kemba Walker scored 10 unanswered points in the third quarter to help build up the Hornets’ 19-point lead and clocked out with 21. Malik Monk added another 21 points in 23 minutes off the bench.

You can’t give Russ an INCH to take off from 🚀 (via @nba) pic.twitter.com/nMSFEkyAS3

Kyrie’s really putting on a handles clinic during a live NBA game. (via @NBAonTNT) pic.twitter.com/A2xmLVoWoj

The Nuggets found themselves in a 12-point hole after sputtering to just 15 points in the opening period, but responded with 68 points in the middle two quarters put the game out of reach for the dysfunctional Cavaliers.

Kyrie Irving had a sluggish start to the season from a scoring perspective, but his second-straight stellar game had TD Garden chanting “MVP!” in the final minute of play as his 28 points and seven dimes brought an end to the Bucks’ undefeated start to the season.

All five of the Celtics starters — Semi Ojeleye (10 points), Gordon Hayward (18), Jayson Tatum (12) and Al Horford (18) — scored in double-digits as Boston made a franchise-record 24 shots from behind the arc.

Giannis Antetokounmpo scored a game-high 33 points and grabbed 11 boards, but poor late-game management cost Milwaukee from having a shot to tie the game late in the fourth quarter.

Kyrie’s really putting on a handles clinic during a live NBA game. (via @NBAonTNT) pic.twitter.com/A2xmLVoWoj

The kid from Greece is FILTHY. (via @NBAonTNT) pic.twitter.com/XCaqZytrOp

SHEESH. Kyrie will finish anything you toss his way inside. (via @celtics) pic.twitter.com/7eVW17qd0o

Portland’s campaign ended earlier than anticipated a season ago after falling victim to a New Orleans’ sweep in the playoffs, but the Trail Blazers got this year’s run off on the right foot by getting revenge behind a 26-point outing by Damian Lillard. The contest was tight throughout the entire night, but the Trail Blazers brought the clamps in the final period as they held the Pelicans to just 20 points.

Anthony Davis was held out of the Pelicans’ starting lineup due to injury, but newly-signed forward Julius Randle had no issues putting the team on his back as he stuffed the stat sheet with 29 points, six rebounds, three assists and a steal.