Andrew Wiggins and Karl-Anthony Towns come up big in OKC and the Nets and Pels get wins. 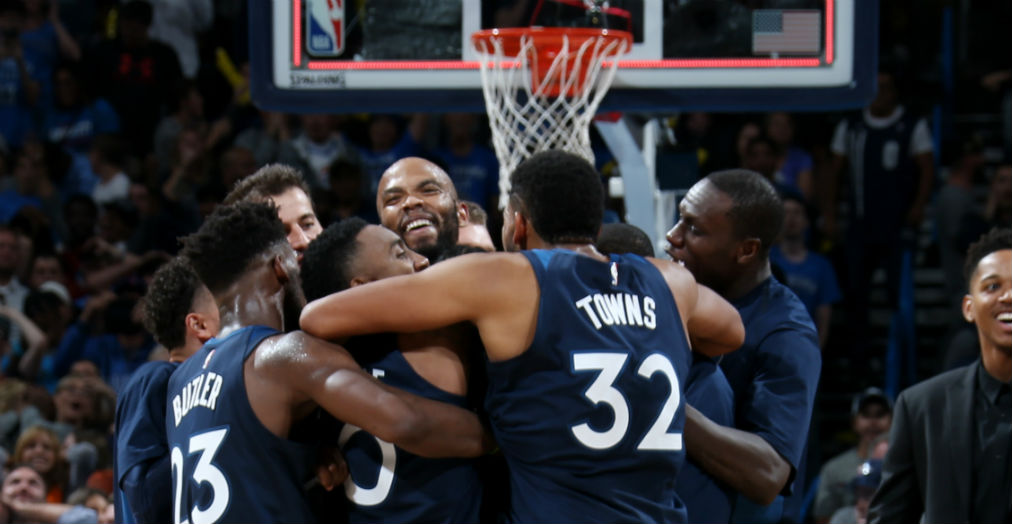 The Nets were able to hold off a fourth quarter comeback attempt from the Hawks after D’Angelo Russell stepped up to hit a pair of clutch jumpers. Russell, who had 10 dimes, was part of a balanced scoring effort by the Brooklyn boys. He and Caris LeVert both scored 16 points, DeMarre Carroll put in 17 and Allen Crabbe added 20 off the bench.

Dennis Schroder went down with an ankle injury in the fourth quarter.

Russell Westbrook was just about unstoppable in the fourth quarter. His 15 fourth quarter points spearheaded the Thunder’s comeback after they were losing 88-75 after the third.

Westbrook ended up with 31 points, complemented by 23 from Carmelo Anthony and 14 from Paul George. Carmelo hit a three-ball from the left wing with 5.1 seconds remaining to give OKC a one-point lead. But Andrew Wiggins wasn’t going to be denied. He pulled up from just inside halfcourt and banked in a buzzer-beating jumpshot to give the Timberwolves the win.

Jordan Clarkson led a furious comeback, an extended 29-6 run, that helped the Lakers overcome a 22-point deficit to take a five-point lead in the fourth. The Pelicans opened up their lead throughout the first three quarters by pounding the paint and giving Anthony Davis and DeMarcus Cousins plenty of touches.

Nah, how'd AD pull this off? (via @nbatv) pic.twitter.com/BVpeDzJKru

But Clarkson, Kyle Kuzma and Julius Randle didn’t quit. It took big shots from E’Twaun Moore and Jameer Nelson (in his first game with the Pels) to put the Lakers down.

Davis finished with 27 points, 17 rebounds, 4 steals and 3 blocks, Cousins added 22 points, 11 rebounds and 8 assists. The young Lakers got plenty of contributions in the losing effort. Clarkson had 24 points and 5 dimes off the bench, while Kuzma scored 20 points and Lonzo Ball filled up the stat sheet, registering 13 assists, 8 rebounds and 8 points.