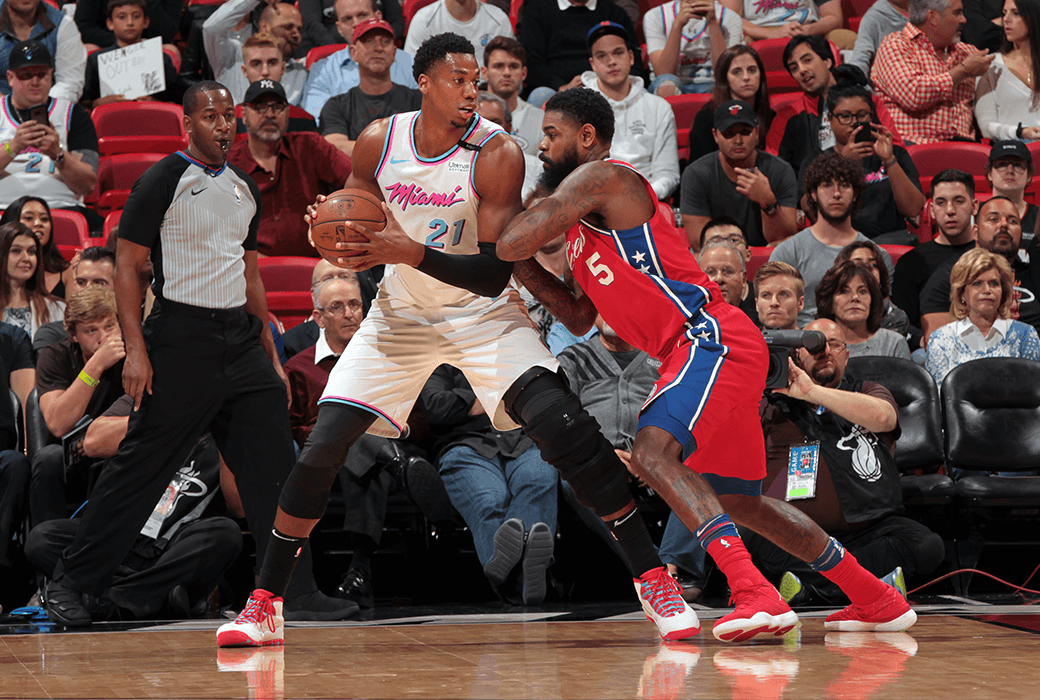 Allen Crabbe hit his first six 3-point attempts en route to a 29-point night as the Nets snapped a four-game losing streak. Caris LeVert chipped in 22 points and eights assists of the bench for Brooklyn.

The Heat picked up a crucial win in its race for the playoffs, moving up a half game on Milwaukee for eighth place in the Eastern Conference.

Hassan Whiteside overshadowed Joel Embiid in a battle of elite big men as he notched 26 points, eight rebounds and two blocks on 9-for-12 shooting from the field.

Dwyane Wade was the Heat’s second-leading scorer with 16 points in 23 minutes off the pine.

DWYANE WADE STILL HAS SOME BOUNCE

HASSAN WHITESIDE WITH THE SLAM OVER JOEL EMBIID 👀

The Cetlics officially punched their ticket to the playoffs as Kyrie Irving and Al Horford combined for 43 points in a well-balanced effort; however, the biggest story of the night was the hard fall that Jaylen Brown took late in the third quarter. Brown was able to walk off the court under his own power.

Nemanja Bjelica led all scorers with 30 points as he went 6-for-9 from the 3-point line.

Derrick Rose dressed for Minnesota for the first time, but didn’t play.

Extremely scary moment in Minneapolis. Prayers up for @FCHWPO. 🙏🏽 (via @BallIsLife) pic.twitter.com/JZvBnG4rNC

Carmelo Anthony surpassed Jerry West to move into 20th all-time for field goals made in a career.

Get you a homie that’s as hype for you as Russ is for Nick Collison 🙌🏽 (via @okcthunder) pic.twitter.com/7hMCzmWWNF

Headband Devin is on the loose. 👀 pic.twitter.com/Wq7cviwO24

Kevin Durant scored 14 points in a span of four minutes and 21 seconds late in the fourth quarter en route to a 37-point night and come-from-behind win. LaMarcus Aldridge led the Spurs with 30 points while five other Spurs scored in double-digits.

Stephen Curry left the game in the first quarter due to an ankle injury and did not return.